In an absolutely brilliant and hilarious Australian ad, a couple of Roman guards urge Jesus, already nailed to a cross, to consider becoming an organ donor before it’s too late.

Because that’s how Jesus can really save. (Up to seven lives!)

(Update: Since the video was taken down, I’ve replaced it with a mirror.)

The ad is for the Australian Organ Donor Register, an independent group affiliated with the national government, and they also released a much more serious film called Dying to Live. The group also noted that while 80% of Australians say they would donate their organs, only 34% actually sign up on the registry. This campaign is designed to get more people to sign up. After all, it’s not like you’ll need those organs in any afterlife.

Naturally, some Christians are furious that Jesus was used for a laugh — even though I would argue he’s hardly the butt of a joke here.

The Australian Christian Lobby is calling for the ad to be pulled from circulation. (So much for being “pro-life.”)

… it is regrettable that this profound expression of sacrificial love has been trivialized as a cheap device for grabbing public attention. A different skit might have communicated the message without alienating a significant portion of the very audience it intended to engage.

We would like to send a clear message to the director Richard Todd and Dying to Live that this mockery of Christianity is not supported by the community. He has done the cause of organ donation a disservice.

If you’re offended by this, then maybe humor isn’t for you. Again, this doesn’t make fun of Christianity or Jesus. It uses a story everyone is pretty familiar with to make a point about how easy it is for any one of us to save lives. See?! Christianity was used as a force for good!

Australians can register to donate organs here, while those of us in the U.S. can do so here. There’s no excuse not to do this. 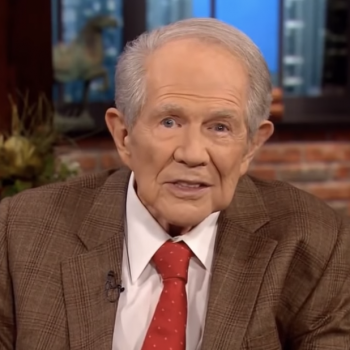 October 18, 2018
Pat Robertson: Dead Journalist Not Worth Risking "$100B Worth of Arms Sales"
Next Post