Christian “Prophetess” Claims She “Walked on Air” (When No Cameras Were Around) October 16, 2018 Hemant Mehta

Kat Kerr, the self-proclaimed Christian “Prophetess,” who thinks Heaven is home to cows driving tractors and a city made entirely out of Jell-O, told an audience over the weekend that she has miraculous powers.

Speaking at the Gateway on Mt. Zion church in Golden, Colorado on Saturday, Kerr explained that she walked on air. You can hear it around the 1:36:00 mark below:

Remember how they operate? Jesus walked on water. I walked on air. And I was quite shocked. [Laughter.]

And my sister was behind me. We were going to the green room. The pastor was in front of me, heading to the green room, and I didn’t know that there was a drop — a step — this big… there’s a big step and then you step down. I didn’t see the step. I just was going. Because he was speaking to me as he was going forward. I was speaking to him while he’s walking. We’re both talking to each other, and I step off the step into nothing.

And it felt like nothing. If you step through water, you would at least feel the water! So I stepped off and I kept going, and then I stepped off with my other foot, and I’m there. And him and my sister, like, gasp behind me. And I was so shocked when I looked down, and I’m this far off the floor, in the air.

This is what is gonna happen to you!

Jesus healed a paralyzed man. Kat Kerr says she hovered for, like, a second when no cameras were on her. Even if she were telling the truth, who the hell cares?! As far as miracles go, that’s a big bowl of nothing. Jesus needs to up His game.

Incidentally, this isn’t even an original delusion.

A couple of years ago, a Christian liar by the name of Shepherd Bushiri claimed he could walk on air, too. Good luck trying to figure out this incredible magic trick.

All that said, Kat Kerr has performed one miracle that I still can’t figure out. How the hell does she get all these speaking gigs?

October 16, 2018
Stephen Hawking Says, in Final Book, "There Is No God. No One Directs the Universe"
Next Post 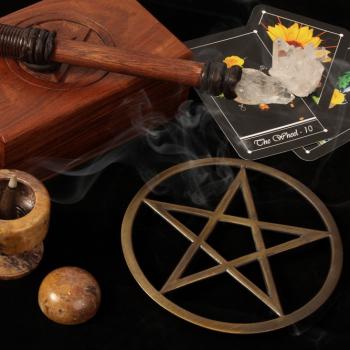 October 16, 2018 By One Measure, Witches Outnumber Presbyterians in the United States
Browse Our Archives
What Are Your Thoughts?leave a comment