Self-proclaimed Christian “prophet” Mark Taylor, the subject of a movie made by some students and faculty members at Liberty University, loves pushing conspiracy theories. Just last week, he claimed Hurricane Florence was a man-made storm meant to destroy evidence of alleged voter fraud in North Carolina.

Hurricane Michael is the work of Democrats in “retaliation” for the confirmation of Brett Kavanaugh to the Supreme Court.

Does anyone else think it's strange that Justice K is sworn in and we have a major hurricane inbound? DS scared? They should be. Retaliation? Absolutely. We will not be intimidated! Warriors arise, time to go to work! You know what to do. …-

Maybe you’re thinking, “No one could possibly believe something that absurd.” But this guy also believes God talks to him and Jesus rose from the dead. Critical thinking isn’t one of his strong suits.

His theory doesn’t even make any sense strategically. If Democrats had the power to summon hurricanes, wouldn’t they wait until Election Day and only go after really conservative parts of Florida? Why do damage to a large swath of a swing state on the last days of voter registration? That’s as dumb as, well, Taylor’s tweet. 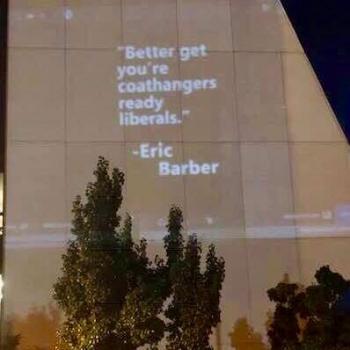