Catholic Moms Defend Kavanaugh with “It Can Happen to Our Sons” Ad October 9, 2018 David Gee

A Catholic group claiming to speak on behalf of #MomsForKavanaugh ran a fear-mongering ad insisting Brett Kavanaugh’s life was “totally and permanently destroyed” by false sexual assault allegations — and that the same could happen to other “good” men.

CatholicVote.org, a non-profit that was founded to promote “pro-life” candidates in Congress, created the dramatic video showing young boys growing up “into men of virtue” and taking on virtuous and courageous jobs… before showing clips from Kavanaugh’s emotional testimony prior to confirmation with ominous text trying to scare mothers into supporting his placement on the U.S. Supreme Court.

"If it could happen to him…" pic.twitter.com/c9s5UFGJKm

If it can happen to him…

It can happen to our sons

It can happen to our brothers

It can happen to our fathers

It can happen to our husbands

It can happen to you

By the way, the tweet we embedded above isn’t from the original source. That’s because CatholicVote appears to have taken down the video from all of its social media without explanation. But not before it evoked plenty of reactions from critics. (Update: The video is gone from Twitter, too. Don’t worry. We saved a copy if anyone needs it.)

Still, it’s worth discussing the video since the sentiment was common among conservatives. It suggests that over-achieving men are all potential “victims,” just one evil woman’s false claim away from their downfall… even though there are plenty of powerful men who aren’t accused of wrongdoing, and even though there is lots of data suggesting the rate of false claims is incredibly low.

While the video was meant to conjure up support for Kavanaugh, who was eventually confirmed, it reinforced the false notion that most sexual assault allegations are the result of liars who just want to damage someone’s reputation. That’s especially true if the person could become a very powerful conservative. (It’s not like the group released a similar video when Al Franken was accused of wrongdoing or demanded a thorough investigation of Kavanaugh before coming to their conclusion.)

It also makes women, who are undoubtedly victims of sexual assault more than they are attackers or oppressors, the enemy while elevating a controversial figure who was credibly accused of attempted assault without a complete investigation. All in the name of religion and Jesus Christ.

Even before the allegations, liberals worried Kavanaugh could be the decisive fifth vote on a number of cases affecting women. Who could’ve guessed the first instance would involve conservatives just flat-out calling women liars? 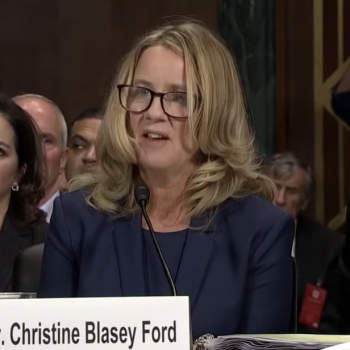 October 9, 2018
Evangelical Group: We Pray That Dr. Christine Blasey Ford "Will Turn to Jesus"
Next Post 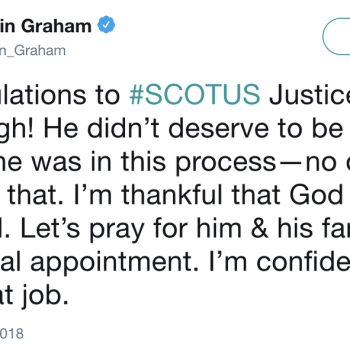 October 9, 2018 Franklin Graham: Brett Kavanaugh is on the Supreme Court Because "God Overruled"
"I had read that somewhere. At this point in my life, I don't need to ..."
democommiescrazierbrother There’s Video of Christian Terrorists Praying ..."
"Hissssssssssterically funny!"
Mundusvultdecipi FL County That Opposed Atheist Invocations ..."
"nOW dOzE AYtiesTz HAv caNSellkUlTurrred jEsuS!!!"
Mundusvultdecipi FL County That Opposed Atheist Invocations ..."
"Is this cretin still alive? Thought we went years ago. He is living proof of ..."
J.P. Bunny James Dobson Has Another Deranged Set ..."
Browse Our Archives
What Are Your Thoughts?leave a comment