Christian preacher Andrew Wommack often makes outlandish claims about Jesus — like the time he said cancer was “no big deal” since Jesus would save you in the afterlife.

During a Truth & Liberty Coalition webcast Monday night, Wommack went in the other direction, slamming liberals for their opposition to Brett Kavanaugh — assuming, as many conservatives do, that Dr. Christine Blasey Ford is lying about everything just to take him down or that she’s telling the truth and it’s irrelevant.

“I believe that the average person would never act the way that they see some of these people acting,” Wommack said. “I believe it is pure evil. There is evil fighting to destroy lives and stuff and I think that we’ve got people in positions of leadership that are demon-possessed.”

“That is flesh, but I believe it is inspired by demons,” Wommack responded, adding that it is therefore imperative that Christians get out and vote in the midterm elections.

“Liberals are crazy,” Wommack stated later in the broadcast. “They are malicious. They are evil … As a rule, liberals are vicious and mean.”

For questioning a man about his myriad lies to their committee, Wommack thinks Democrats are demonic.

This is what the Left has to deal with. Good faith actions to expose possible problems with a candidate is seen as an existential threat for the other side. 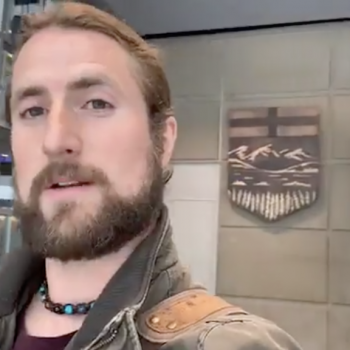 October 3, 2018 After Modifying Anti-Gay Policy, a Christian School Reverts Back to the Original
Browse Our Archives
What Are Your Thoughts?leave a comment