A school board candidate has apologized for his bizarre campaign sign after it caused a huge stir online. The strangest thing about it? Promoting Creationism isn’t the controversial part. 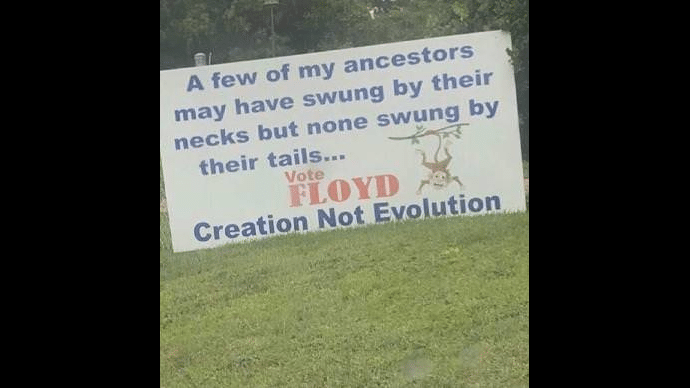 Jamie Floyd is running for a seat on the Rapides Parish School Board in the central part of Louisiana, and while most of his signs are innocuous, that one also got the green light. The Creation bit is self-explanatory — and ought to be a dealbreaker for the voters — but what’s the first part about? Is it a reference to lynching?

Apparently not. I guess it’s supposed to suggest Floyd has criminals in his past who were hanged, but at least that’s not as bad as thinking they were monkeys. Even though that’s not how evolution works…

He may be ignorant and tone-deaf, but he insists he’s not racist.

When local news station KALB asked him for an interview, he agreed, but then rescinded the offer at the last second. Maybe he realized defending the sign wasn’t in his best interests. He did release a statement, though, apologizing for the confusion and saying he asked his black friends to look at his sign before it went up. (See? Not racist at all.)

We set up an interview with Floyd,who wanted to set the record straight, however he chose not to go on camera an hour before the meeting. Instead, he provided a statement.

“I’m sorry if I offended anyone with this sign,” Floyd wrote. “I have used this line in a past Town Talk article and never once received a negative comment. I also ran it by other races before putting it out and they understood what I was saying. I do believe in creation and not evolution. That I am not sorry for.“

So he’s sorry he was misinterpreted, but he’s not sorry he doesn’t understand science, and he definitely wants to control what kids learn in school.

This guy has no business on a school board. Hell, this guy has no business on your pub trivia team. He thinks believing the Bible is an appropriate qualification for a seat on a school board. Voters would be making a huge mistake if they vote him into office. It’s not just the sign. Floyd previously urged the Rapides Parish Courthouse to display the Ten Commandments — a motion that thankfully didn’t get anywhere.

We have every reason to believe he’d use his power to push religion into public schools. That would inevitably lead to lawsuits the District would lose, and the taxpayers would be on the hook for the costs.

For now, Floyd says he won’t be using this particular sign again.

September 30, 2018
Study: The Faith of U.S. Senators Has an "Enduring Influence" on Their Votes
Next Post 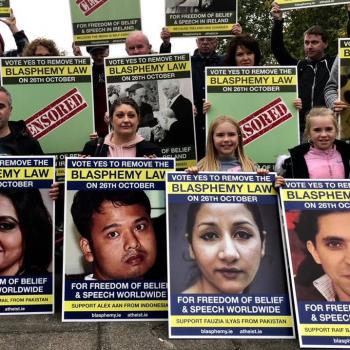