Conservative radio host Jesse Lee Peterson, last seen criticizing Brett Kavanaugh for not being a real man because he has two daughters, now says the Democratic senators who questioned Kavanaugh in his hearing this week were demonic:

“Those women who control the Democratic Party hate men [and] hate God, because men represent God on earth.” Peterson asserted. “It’s a spiritual battle, folks. It’s warfare between good and evil. It has nothing to do with being male or female, it’s the god that you serve and the Democratic Party is of its father, the devil; and all the little Democrats running around represent Satan. They’re evil people.”

Another totally sane rant from a guy who leveled much of the same criticism against… Meghan Markle.

As much as I’d love a Democratic party represented by passionate atheists, they weren’t the ones screaming at the hearing. Democrat Chris Coons, the senator who helped convince Jeff Flake to demand an FBI investigation into Kavanaugh, is among the most religious senators in office and a co-chair of the National Prayer Breakfast. The women who asked the judge questions included Amy Klobuchar who was interrogated by Kavanaugh about whether she ever got black-out drunk and Kamala Harris whose questions were measured and focused.

Not that they need defending from a man whose only claim to relevance is saying the most obnoxious thing he can think of in the name of the Christian God. 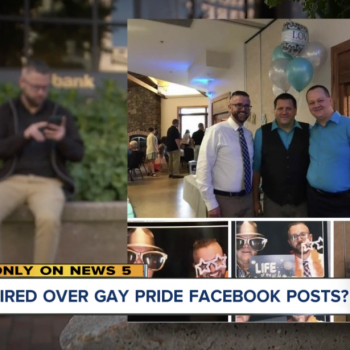 September 30, 2018 Study: The Faith of U.S. Senators Has an "Enduring Influence" on Their Votes
Browse Our Archives
What Are Your Thoughts?leave a comment