I know you’ve all been wondering what Pat Robertson has to say about today’s testimony by Dr. Christine Blasey Ford. Don’t worry. We have the answer.

On today’s episode of The 700 Club, Robertson asked God to “throw confusion” into Ford’s testimony — along with anyone else who has accused Brett Kavanaugh of sexual misconduct.

“The Supreme Court of the United States is the power center of the liberal left,” he said. “They have done their bidding for years and years and years, and now comes a decisive moment as to whether they will lose control of that particular body and they are putting an all-out assault to destroy the reputation of one of the finest judges in America. It is a pre-planned plot, it is unbelievable, and if anybody buys it, they’d be willing to buy the story of the Great Pumpkin and any other myth that you can think of.”

Robertson then asked his viewers to join him in a “special prayer” as the Senate prepared to hear testimony this morning from Christine Blasey Ford, who claims to have been sexually assaulted by Kavanaugh when both were in high school.

The phrasing is weird. If any accusations are false, then there would be no need to throw confusion into the mix. If anything, you want false accusations to be told as is so that they can be thoroughly (and easily) rebutted. The Republicans could just call for an FBI investigation to sift through the discrepancies.

But let’s suppose Robertson meant to condemn allegations that are legitimate — and which he doesn’t believe. In that case, throwing confusion into the mix would be asking God to make their true stories less valid in the eyes of the public so that a man guilty of sexual assault can get onto the Supreme Court.

In other words, he wants God to make the victims more (literally) unbelievable for the sole purpose of getting Kavanaugh onto the Court.

It’s not surprising. It’s exactly what you’d expect Robertson to pray for. Was anyone seriously thinking he’d ever take the side of an alleged victim over an anti-abortion conservative jurist?

Also, let’s not ignore Robertson conveniently dismissing those who call for an investigation and accept Ford’s testimony as gullible — so much so that they believe in the “Great Pumpkin and any other myth that you can think of.”

Robertson, a guy who believes a man came back to life three days after dying, has no business telling other people to not be so gullible.

September 27, 2018
48% of White Evangelicals Would Support Kavanaugh Even If He Assaulted Dr. Ford
Next Post 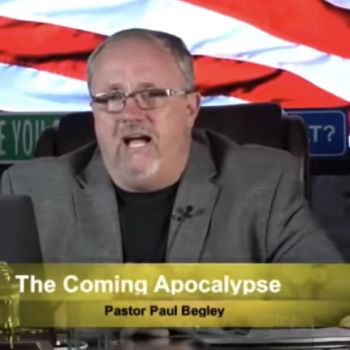