The State of Texas wants to force students to stand and say the Pledge of Allegiance — implying that schools should be allowed to punish kids who refuse to participate — unless they have a note from their parents.

The case involves 17-year-old India Landry who, last October, was expelled from school because she wouldn’t stand for the Pledge. 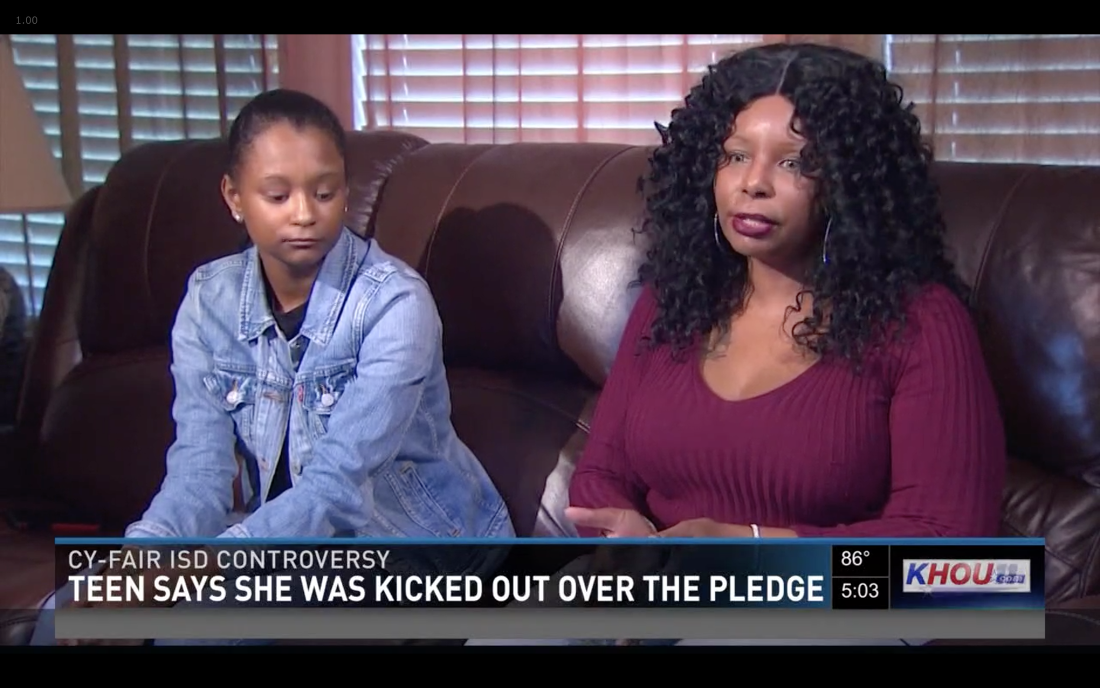 A federal lawsuit was filed later that month and the details were almost too farfetched to be believable, but the story went like this: India had sat during the Pledge for personal reasons “around 200 times in class” without incident. But that day, she happened to be in the office of Windfern High School Principal Martha Strothers when the Pledge came over the public address system. She stayed seated. Then all hell broke loose.

The lawsuit also noted that things didn’t get any better when she was awaiting her ride home in Assistant Principal Penny Irwin-Fitt‘s office.

Days later, during a meeting between everyone involved, nothing got resolved:

It was only after a local news station aired a story about the “Pledge controversy” that Strother called the family to say India could return to school. She did just that — after the Pledge was recited — but had every intention of remaining seated the following week.

A spokesperson for the District later told a reporter that all the claims were absurd because the officials wouldn’t do what they were being accused of.

The district has responded with the following statement:

“A student will not be removed from campus for refusing to stand for the Pledge. We will address this situation internally.”

The school district has a policy that if you don’t say the Pledge of Allegiance, you still stand unless you have a note from your parents.

That last bit was still illegal. Nobody needs a note from their parents to remain seated during the Pledge. That said, India’s mother was going to write a note on her behalf… but said it became a moot issue after India was kicked out. The larger point, however, is that no one should ever be punished by the government for staying seated during the Pledge.

This lawsuit is still pending, but there was a disturbing development this afternoon. Ken Paxton, the Attorney General of Texas, filed a motion to intervene on the District’s behalf. That is, the State wants to step in and fight the Landrys because they say the issue involves state law, which they have an obligation to defend.

“The U.S. Supreme Court has repeatedly held that parents have a fundamental interest in guiding the education and upbringing of their children, which is a critical aspect of liberty guaranteed by the Constitution,” Attorney General Paxton said. “The Texas Legislature protected that interest by giving the choice of whether an individual student will recite the Pledge of Allegiance to the student’s parent or guardian. School children cannot unilaterally refuse to participate in the pledge.”

“Requiring the pledge to be recited at the start of every school day has the laudable result of fostering respect for our flag and a patriotic love of our country,” Attorney General Paxton said. “This case is about providing for the saying of the pledge of allegiance while respecting the parental right to direct the education of children. The district court should uphold the Education Code and the right of parents to determine whether their children will recite the Pledge of Allegiance.”

In short, Texas wants to force children to stand up and say the Pledge as a matter of forced patriotism (talk about an oxymoron) unless parents say it’s okay for their kids to opt out. That is blatantly unconstitutional — it violates the spirit and laws regarding free speech and peaceful dissent.

Students don’t have to stand for the Pledge.

Students don’t have to say the Pledge.

Students don’t need to give a reason for refusing to take part in the mindless ritual.

Students can’t be punished by their public schools for not participating.

And students sure as hell don’t need their parents’ permission for any of this.

If any other nation forced kids to recite a pledge to their country each morning, we’d call it brainwashing. Paxton calls it tradition.

That said, Texas law isn’t very clear on this. It says “school[s] shall require students” to say the Pledge of Allegiance — along with another pledge to the state flag and take part in a moment of silence.

Other states may require schools to recite the Pledge, but they don’t say students have to participate.

The Texas law also says, “On written request from a student’s parent or guardian, a school district or open-enrollment charter school shall excuse the student from reciting a pledge of allegiance under Subsection (b).” Depending on how you interpret that, while a note from a parent can get you out of saying the Pledge, it’s not necessary. Students are allowed to make the decision for themselves.

Incidentally, a similar case in Florida went in favor of the students. It struck down a state law that required students to stand and recite the Pledge. The judge in Texas should do the same.

This was already a messed up lawsuit. Now Texas is intervening to make sure kids can’t dissent at all. Even in that state, I can’t imagine this argument sitting well in any court.

(Screenshot via KHOU. Large portions of this article were published earlier) 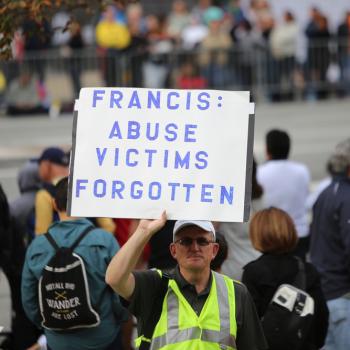 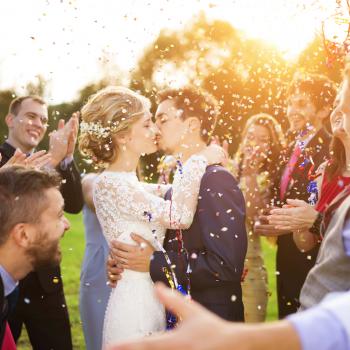 September 25, 2018 Pastor: Christians Should Skip the Weddings of Couples That Had Premarital Sex
Browse Our Archives
What Are Your Thoughts?leave a comment