Because he’s really the best guy to convince everyone to find Jesus.

Moore said that if students, free of influence from school officials, wish to pray over a loudspeaker before games, the law permits it.

“Nobody stands up for the students of this state and we’re going to do that,” Moore said at the press conference.

Moore’s movement is under the banner of the Foundation for Moral Law, of which his wife, Kayla, is the president.

The foundation said last week it had sent memos to all Alabama school district superintendents outlining how prayer can be given before games.

As usual, the former justice doesn’t understand how law works. If students want to pray on their own, it’s fine, but when the school gives them control of the loudspeakers before a game, it becomes school-sanctioned prayer. This isn’t controversial or up for debate. The Supreme Court ruled on it nearly two decades ago.

Moore acknowledges that case in a letter sent to all the districts, but he offers a different interpretation of the ruling:

Contrary to the FFRF’s one-sided and simplistic analysis, the Supreme Court’s decision in Santa Fe Independent School District v. Doe… did not invalidate student-initiated prayer at athletic events. Rather, the Court focused on the extensive state involvement in the prayers.

… Where the message is the student’s and not the school’s, the Establishment Clause has no application, and the Free Exercise and Free Speech clauses control. A school-district policy which permitted a student message at the opening of a football game without prescribing the content of that message would be wholly constitutional. A recent well-reasoned appellate case from Texas upheld the practice of allowing football cheerleaders to paint messages on run-through banners, some of which contained Bible verses, on the ground that the message was that of the students, not the school.

Again, using the school’s loudspeaker makes it school-sponsored prayer. The Kountze cheerleader case, as problematic as it was, doesn’t involve school equipment.

But let’s just look at this from a broader perspective for a moment. No one — including atheist groups — has ever had a problem with athletes praying on their own before a game. No one has a problem with the students forming a prayer circle on their own, either.

Roy Moore isn’t okay with any of that. Prayer doesn’t count, in his mind, unless you’re pushing it on everybody else. That’s why he installed a Ten Commandments monument in a courthouse. That’s why he wants everyone in the crowd to be subject to the Christian prayers (and make no mistake, they would always be Christian prayers even if he says he’d defend Muslim students doing the same thing).

He has a habit of forcing himself onto people who don’t want it.

If he ever opened a Bible, he would know it’s a bad idea to pray to be seen by others. It also contradicts the Bible to suggest God doesn’t listen to people who pray silently. (Christians like Moore believe God is omnipotent… yet has a hearing problem.)

The best part about the letter, though, is a little disclaimer he includes at the very end:

Even Roy Moore admits he doesn’t give competent legal advice.

That’s a smart disclaimer, though. District attorneys should read this memo and then promptly tear it up. They’re not persecuting Christians by forbidding the use of the public address system for religious purposes before a game. Students have never been forbidden from praying on their own. Roy Moore knows that.

But his identity has always been about playing the victim, even when he’s the abuser.

(Screenshot via YouTube. Thanks to Joseph and Brian for the link) 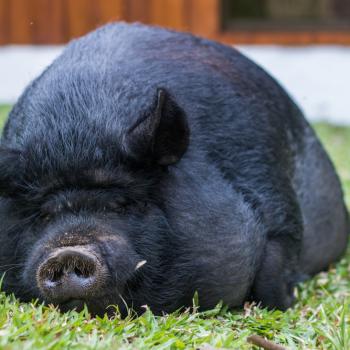 September 23, 2018 Satanist Sues Chicago for Religious Discrimination Over His Pet Pig "Boarphomet"
Browse Our Archives
What Are Your Thoughts?leave a comment