Beth Moore is something of an evangelical giant — a woman who talks about both Jesus and the struggle to find decent childcare. A lot of Christian women read her books, participate in her Bible studies, and flock to her conferences, mainly because she seems so relatable.

But lately, her anti-Trump tweets and support for the #MeToo movement have threatened her livelihood. Many evangelicals, both male and female, liked her best when she was docile and submissive. When she speaks out against injustice, many feel she has “forgotten her place.” 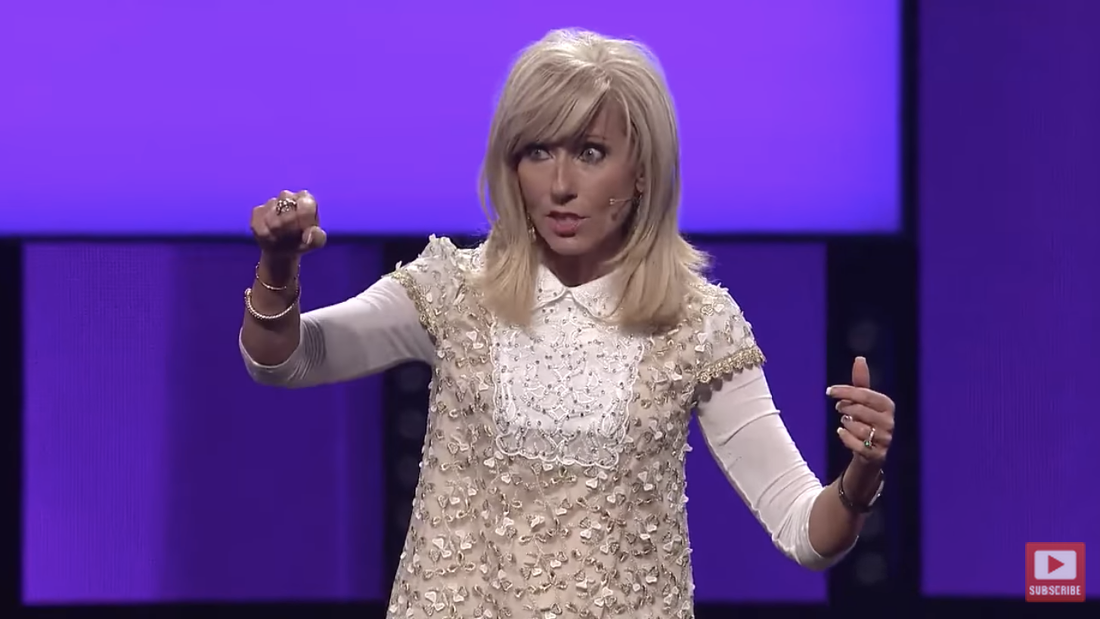 Emma Green writes in The Atlantic:

Moore was flying home from a ministry event in October 2016 when she decided to compose the tweets that changed her life. That weekend, she had glimpsed headlines about Donald Trump’s 2005 comments on the now infamous Access Hollywood tape. But it wasn’t until that plane ride, with newspapers and transcripts spread out in front of her, that Moore learned the full extent of it — including the reaction of some Christian leaders who, picking up a common line of spin, dismissed the comments as “locker-room talk.”

“I was like, ‘Oh no. No. No,’” Moore told me. “I was so appalled.” Trump’s ugly boasting felt personal to her: Many of her followers have confided to her that they’ve suffered abuse, and Moore herself says she was sexually abused as a small child by someone close to her family — a trauma she has talked about publicly, though never in detail.

The next day, Moore wrote a few short messages to her nearly 900,000 followers. “Wake up, Sleepers, to what women have dealt with all along in environments of gross entitlement & power,” she said in one tweet. “Are we sickened? Yes. Surprised? NO.” Like other women, Moore wrote, she had been “misused, stared down, heckled, talked naughty to.” As pastors took to the airwaves to defend Trump, she was trying to understand how “some Christian leaders don’t think it’s that big a deal.”

It’s sad that speaking out against a serial sexual predator — by his own admission — is considered controversial in Moore’s world, which places heavy emphasis on submission to authority. One has to wonder how much more seriously her criticisms would be taken if her name were Bill Moore instead.

The tweets upended Moore’s cheerful, feminine world. Breitbart News claimed that Moore was standing “in the gap for Hillary Clinton,” borrowing a turn of phrase from the Book of Ezekiel. Moore did not support Clinton; she told me she voted for a third-party candidate in 2016. But she was horrified by church leaders’ reflexive support of Trump. To Moore, it wasn’t just a matter of hypocrisy, of making a deal with the devil that would deliver a Supreme Court seat, among other spoils. Moore believes that an evangelical culture that demeans women, promotes sexism, and disregards accusations of sexual abuse enabled Trump’s rise.

A number of male evangelical leaders asked Moore to recant. A few days later, she returned to Twitter to clarify that she was not making an endorsement in the election. She felt depressed, she told me: “I can’t tell you how many times … I faced toward heaven with tears streaming down my cheeks, thinking, Have I lost my mind?”

Since her first critical tweets of Trump, more well known pastors have been accused of sexual abuse, prompting a #MeToo spin-off in the church: the #ChurchToo movement. That’s given her a different kind of platform — one in which she speaks openly about the sexism she faces as a prominent evangelical woman. She has also criticized the unstated bargain white evangelicals made with the Republican Party in which most of them support Trump’s agenda (or at least don’t openly condemn in) in exchange for a whole bunch of judicial nominees who pledge to promote conservative ideals.

I have plenty of theological disagreements with Moore, but it’s encouraging to see her wake up to the bitter truth that churches have not been the safest place for survivors. While she may have lost several fans, her ministry’s new direction could bring in plenty of other Christians who want nothing to do with modern evangelicalism. Atheists may say it’s better if they left the faith altogether, but a ministry that helps survivors whose own church communities don’t take their stories seriously isn’t the worst alternative.

September 19, 2018
Priest Who Thinks Gay People Should Be Put to Death Burns a Rainbow Flag
Next Post