Earlier this month, during a service at Kenneth Copeland‘s Eagle Mountain International Church, evangelist Paula White (a spiritual adviser to Donald Trump) and Copeland’s daughter Terri Pearsons told the crowd in no uncertain terms that they needed to vote Republican this November.

Now the Freedom From Religion Foundation is urging the IRS to investigate the church for violating the Johnson Amendment. This church needs to lose its tax exemption since it clearly wants to be a political organization instead of a non-profit that plays by the rules.

The irony is that the clip includes this portion:

“Thanks to the Lord and Donald Trump, we can talk about these things in church on Sunday morning,” Copeland added from off-stage to raucous applause.

“I can say to you, ‘Vote red,’” Pearsons declared. “I can say that to you without any fear that the IRS is going to take away your right to donate to this church and deduct it from your taxes and without you being audited because of it. That’s over and that’s because our president did that for us.”

That was simply delusional. Despite Trump saying he’s repealed the Johnson Amendment, which would allow pastors to tell their congregations how to vote, he hasn’t done it at all. Congress has the power to repeal it, but they haven’t done so, in part due to opposition from thousands of religious leaders who don’t want their churches turning into political battlegrounds.

FFRF attorney Rebecca Markert says in her letter to Mary A. Epps of the IRS’ Exempt Organizations Examination Office that this church is violating the law.

If it’s still in effect, FFRF says, the IRS should do its job and investigate this church for violating the rules of its tax exemption.

FFRF sued President Trump over this assertion [that the Johnson Amendment was repealed], and the Department of Justice admitted in court filings, twice, that Trump’s proclamation did not and could not repeal a congressional statute… FFRF dismissed its lawsuit because the Trump administration admitted that Trump had simply lied when he claimed that he had repealed the Johnson Amendment.

FFRF respectfully requests that the IRS commence an immediate investigation into these violations of IRS regulations. The IRS should take appropriate action to remedy any violations that occurred or that continue to occur. This is particularly crucial because, just before a national election, the President of the United States is openly repeating an assertion that he has repealed this law even after his own Department of Justice has admitted this to be false.

This is really a question of whether Christians should be allowed to break the law without consequences. If the IRS has rules, it needs to enforce them. At the very least, conservative Christians need a reminder that Trump lied to them about repealing the Johnson Amendment and pastors who tell everyone how to vote (while on the clock) are putting their tax-exempt status at risk no matter how deluded they are into thinking Trump fixed everything. 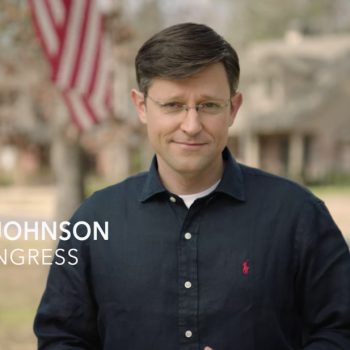 September 19, 2018
Louisiana Lawmaker Says, Without Evidence, That Atheists Are Spying on Students
Next Post