Pastor Donnie Romero, the leader of Stedfast Baptist Church in Fort Worth, Texas, has said plenty of horrible things in the past. This time, it’s not even faith-based hate. It’s just a guy being an ass.

If you have an emotional support dog, I don’t care what kind of dog it is, you’ve got a problem. You are fearing too much.

Look. I took a picture. I was in the airport in Jacksonville, Florida, and there was a fully grown man who looked like a like a tough guy, and he had an emotional support dog. And — I watched him because I thought maybe he’s holding it for his wife. Maybe he’s holding — He was on the plane all by himself!

Look, I wasn’t even allowed to have Linus’ blanket. You know… remember Linus had his blanket that he carried around? My dad would’ve been like [slap gesture]. “Put that away! You don’t need it”… What happened to that?! What happened to “Just buck up and stop acting like a little baby. Stop crying about it”? You know what I mean?

But emotional support dogs… you got emotional support ferrets. Emotional support hamsters. You know… some of these emotional support dogs, they’re not these little dogs. They’re like big dogs. They’ll pick whatever dog they want. Sometimes, I think it’s a cop out for people to take their dogs with them wherever they want to go. But sometimes I think that these… again, if you need a little puppy, if the puppy is going to give you comfort, this little tiny poodle… Let’s say… if you’re a husband and your wife needs a poodle to help her feel safe… I’ll end it right there.

Could you imagine that?

You know, maybe you know… check your wardrobe, maybe you got the skinny jeans… you know what I mean?

A man who thinks hitting kids is okay and laughs at people whose life is a little better because they have an animal like that is precisely the sort of person who needs more love. Someone get Romero a puppy.

Incidentally, these pets aren’t for people who are weak, as Romero suggests. They’re for people struggling with anxiety, depression, panic attacks, etc. — issues that don’t discriminate by age or gender. Not that Romero cares. He has a singular definition of what it means to be a real man and requiring support — of any kind — means there’s something wrong with you.

It’s a horrible way to live your life, assuming that anyone who wants or needs help — and isn’t hurting anyone else in the process — deserves mockery. But that’s what Jesus taught this guy. 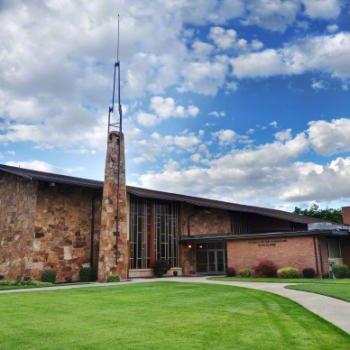 September 18, 2018
Mormon Leader Doesn’t Want You to Know a Gun Went Off in a Church Meetinghouse
Next Post