A lawsuit challenging Michigan adoption and foster agencies that discriminate against same-sex couples while getting government funding recently got a green light to continue.

In what could end up being a precedent-setting case, a judge denied a motion to dismiss the case filed by the ACLU on behalf of two lesbian couples who were rejected by an agency because of their sexual orientation. The suit seeks to prevent Michigan from entering into any contracts with child placement agencies that discriminate against same-sex couples, according to the Detroit News.

The suit asks U.S. District Judge Paul Borman to enter an order that bars Michigan from entering into contracts with or providing taxpayer funding to private child placing agencies that exclude same-sex couples from consideration as foster or adoptive parents. It also seeks an order directing the state to ensure that lesbian and gay individuals and couples are treated the same as heterosexual individuals and couples by state-contracted child placing agencies.

The case involves two Michigan couples, Kristy and Dana Dumont and Erin and Rebecca Busk-Sutton, who each sought to adopt a child in foster care but faced rejection from state-contracted child placement agencies based on religious objections to same-sex parents.

This lawsuit seems pretty reasonable. The couples who filed it are just looking for equality after being rejected by an agency that felt they weren’t worthy of being parents just because of who they loved. By all other criteria, they were excellent potential parents. The fact that taxpayers pay for this discriminatory behavior by the agencies is incredibly ridiculous.

The couples sued the director of the Michigan Department of Health and Human Services, as well as St. Vincent Catholic Charities and the head of the state’s Children’s Services Agency, saying their treatment was a violation of both the Establishment Clause and Equal Protection Clause. The defendants asked the judge to throw out the case, saying they shouldn’t be forced to violate their own beliefs even if they’re receiving taxpayer funding.

But Judge Borman didn’t buy that defense. Instead he said there was reason enough for this lawsuit to continue.

In his order Friday, the judge said the couples had successfully argued the religious screening practices harmed them and denied “the same opportunities to work with a child placing agency that is available to every other family in Michigan seeking to adopt.”

The judge also shut down the defendants’ faulty arguments.

… [Borman] rejected St. Vincent’s arguments that its free speech would be violated if Michigan were barred from allowing religious criteria by private agencies the state hired.

“Much of St. Vincent’s argument relating to its First Amendment claims relies on matters outside the pleadings that the Court cannot consider at this stage of proceedings and that in many instances directly contradicts the allegations of Plaintiffs’ Complaint,” the judge wrote.

Lawyers for St. Vincent pointed out that the ruling merely “allows the ACLU’s lawsuit to proceed,” which is true. But it was a major hurdle cleared on the way to justice for same-sex families in Michigan, and more importantly it showed a glimpse into the judge’s thinking on the subject. 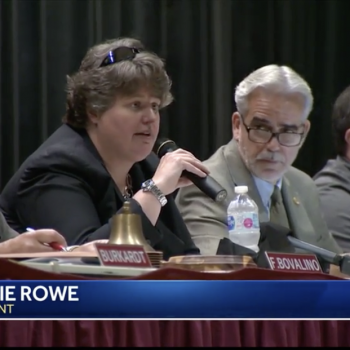