Chelsea Clinton: It Would Be “Unchristian” to Overturn Roe v. Wade

In an interview with SiriusXM’s Signal Boost, former First Daughter Chelsea Clinton recently made a bold (and bound to be controversial) statement that it would be “unchristian” to overturn Roe v. Wade, a move that is undoubted on the table if judge Brett Kavanaugh is confirmed to the Supreme Court.

“I look at my children and I have to quote Jim Yong Kim, ‘optimism is a moral choice,’” she replied. “Every day I make the moral choice to be optimistic. That my efforts and my energies, particularly when I’m fortunate enough to be in partnership with fellow travelers, hopefully will make a difference.”

“And when I think about all of the statistics — that are painful — of what women are confronting… today in our country, and what even more women confronted pre-Roe and how many women died and how many more women were maimed because of unsafe abortion practices, we just can’t go back to that,” she continued. “That’s unconscionable to me, and also, I’m sure that this will unleash another wave of hate in my direction, but as a deeply religious person, it’s also unchristian to me.”

No doubt, millions of conservative Christians will be outraged to hear that. It doesn’t mean she’s wrong. If the “pro-life” movement was truly invested in saving lives, they would ensure that women have access to safe and legal abortion, rather than having to go underground. Making contraception available to anyone who needs it, coupled with comprehensive sex education, would also make abortions less needed in the first place. It’s unfortunate that the people fighting abortion rights seem to be unaware, or choose not to care, about the number of women who die from illegal abortions, many of whom already had children who were suddenly orphaned.

So, yes, Clinton has a point. It’s “unchristian” to make abortion illegal even if you assume being Christian and being “pro-life” are synonymous because doing so would only make abortions less safe and lead to more problems.

If only they could get past the propaganda, the anti-abortion crowd could work well with pro-choice advocates to ensure that women have safe environments to welcome children into — or the means to avoid unwanted pregnancies in the first place.

September 14, 2018
Creationist Running for School Board Says He Supports a "Fact-Based Curriculum"
Next Post 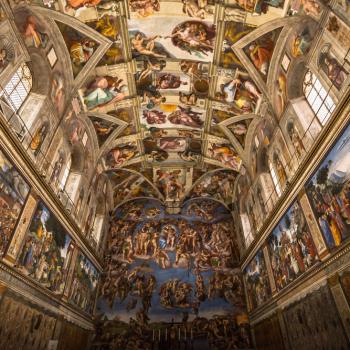 September 15, 2018 Sistine Chapel’s Choir Accused of Embezzlement, Fraud, and Money Laundering
Browse Our Archives
What Are Your Thoughts?leave a comment