After Anti-Abortion Protest Outside High School, Atheists Respond With Love

Students who were trying to attend East Central High School in Tulsa, Oklahoma earlier this week had to walk through a line of protesters holding up graphic images of mutilated fetuses.

The Christians with the Abolitionist Society of Tulsa reportedly “approached kids with… messages and pamphlets,” though the group insists they were passively protesting in a legal spot (suggesting that students came to them).

Why were they annoying the hell out of teenagers who were just minding their own business?

If you have to ask, you’ve clearly never dealt with conservative Christians…

Here’s a glimpse of what students had to deal with.

If teenagers didn’t already have enough of a reason to walk away from religion, this should do the trick…

There’s good news, though. After parent Rebecca Kendall‘s daughter was approached by the creepy Christians, Rebecca asked the Atheist Community of Tulsa if they could do anything in response. It wasn’t about shutting down a legal protest, but perhaps the atheists could push back in some way.

So that’s what they did yesterday morning. But they didn’t respond with pamphlets promoting abortion rights or telling kids to stop believing in God. They weren’t just presenting an opposite message. Instead, they showed up in the same spot with signs promoting love and denouncing fear. 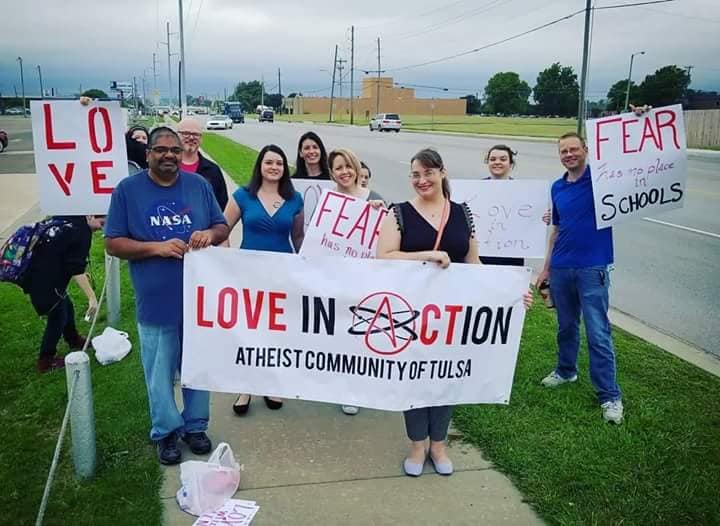 The group’s president Amanda Baggett explained the nature of their counter-protest on Facebook:

The Atheist Community of Tulsa would like to thank everyone who joined us today in supporting the students, parents, and teachers at East Central High School this morning. We were glad to be able to provide a safe and loving alternative to the hate-filled group that had caused so many problems there this week.

ACT will always stand in solidarity with parents, students, and teachers seeking safe and caring environments that allow our future generations to have the best opportunities for learning and success.

In addition to the signs, the atheists also handed out packs of Smarties with a note saying “You rock!”

Because that’s how kind and decent people operate in society. 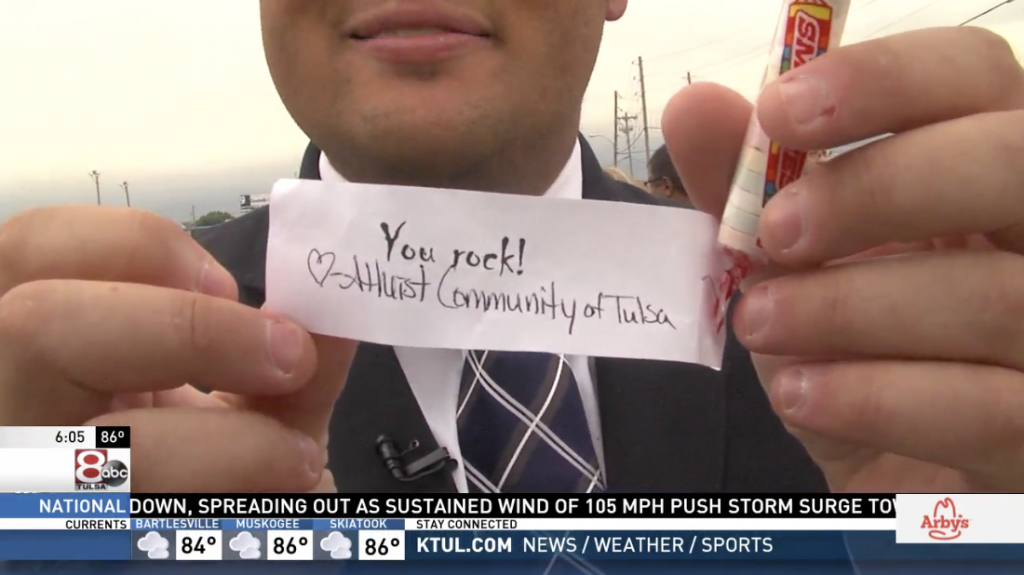 That image comes from a local news report about the protest and counter-protest. (Talk about positive press for atheists…) The best part of the segment occurs around the 1:05 mark when a student shouts out praise for the atheists from a distance. One of the atheists jokes back, “It’s not just because we got you candy, right?”

The kid’s response? “No, it’s because you’re not yelling at us with a megaphone!”

Another highlight: Near the end of the segment, another woman is surprised to learn that the counter-protesters are from a local atheist group. She’s taken aback for a moment, before responding with, “I love your message!”

Baggett says in that segment that the school is both “the wrong place for an abortion debate” and the “wrong way” to talk about those issues: “There are other ways to have that debate, and honestly, we’re not here debating abortion [or] religion. We’re here saying our kids need better, and they deserve better.”

Good thing there were atheists in the community to clean up after the Christians. 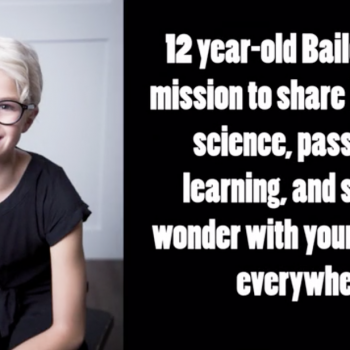 September 13, 2018
A 12-Year-Old is Publishing Her Third Book About the Beauty of the Universe
Next Post 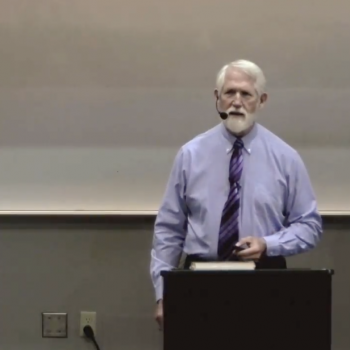 September 14, 2018 Arizona Asked a Young Earth Creationist to Review Evolution Teaching Standards
Browse Our Archives
What Are Your Thoughts?leave a comment