Pastor Rick Joyner: Hurricane Florence Is the Result of Sin, Not Climate Change

What caused Hurricane Florence to appear? Was it climate change making hurricanes more frequent and forceful? Hahahahahahahaha. Don’t be silly. God’s just punishing us for sin, according to Pastor Rick Joyner of MorningStar Ministries.

He was responding to a recent editorial in the Washington Post in which the paper said Donald Trump was “complicit” in the storm because he was making the climate change problem even worse.

That’s crazy talk, said Joyner, shifting the conversation to the realm of the imaginary.

“I read where The Washington Post is blaming the storm on President Trump,” Joyner said. “You gotta be kidding me. How crazy can you be? They were literally saying, ‘He has to take the blame for this storm because of his belief on climate change, or lack of belief in climate change’ … All this does is make the climate change people look like bigger nuts than ever.”

“More than dumping too much CO2 into the air or anything else, the scripture makes it clear what causes these things,” Joyner added. “It is sin. Sin, which is clearly defined in scripture. One of the worst things we could do to bring a curse on a nation is the shedding of innocent blood. What could be more innocent than the unborn? And look at what America is doing.”

Who knew Hurricane Florence was powered by the blood of unborn fetuses?

Do these people realize that overturning Roe v. Wade won’t prevent future natural disasters or do they just not care? 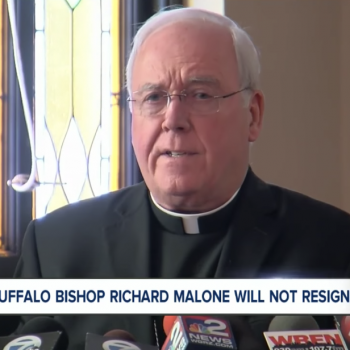 September 13, 2018 The Diocese of Buffalo Lied About How Many Priests Have Been Accused of Abuse
Browse Our Archives
What Are Your Thoughts?leave a comment