Bowie High School in Austin, Texas has a neat program for seniors with good attendance: If they want to pay $50 for a reserved parking spot, they’re allowed to paint it to reflect their personalities. Cool idea! So of course administrators found a way to ruin everyone’s fun while potentially violating church/state separation.

The problem is that school officials rejected a couple of submitted designs that seem to be innocuous. In one case, they rejected an African-American student’s self-portrait in which she wears a shirt that says “Black Girl Magic” (a phrase of empowerment). In another, the principal told an Indian girl she couldn’t paint the Taj Mahal because it too closely resembled a mosque. (That was after the school approved her original design.) In yet another, they said no to a design of a yin-yang.

What is allowed? A “Blue Lives Matter” flag and “multiple parking spots with bible verses painted on them.”

Multiple students at Austin’s Bowie High say they were told to change the paintings on their senior high parking spot because administrators said they were too religious. Meantime there are multiple with bible versus that didn’t get rejected. pic.twitter.com/z5E81XHjNJ

Brooke Wilkerson wrote Romans 12:21 on her parking spot, which is, “Do not be overcome by evil, but overcome evil with good.”

“As a Christian student I can put my Bible verse, but as someone who believes in Allah and worships Islam, the religion, they should be able to put whatever they want on their parking spot,” Wilkerson said.

Wilkerson understands something the administrators don’t seem to get: If religious references are allowed, that applies to everyone. That means yes to pentagrams, atheist symbols, and even a Taj Mahal that looks like a mosque. (Though if religious references are permitted, then I imagine political and social ones would be allowed, too, and all of that seems like a controversy waiting to happen. Just wait until someone paints a rainbow flag with a diagonal “No” slash through it.)

The strange thing is that the school says religious references aren’t allowed at all.

In a statement to KXAN News, AISD spokesperson Cristina Nguyen wrote, “The spots are a privilege for eligible students, however, all parking spot designs are subject to approval and cannot include religious symbolism.”

That means writing Bible verses isn’t religious symbolism… or the school has different standards for different students. They need to get stricter rules and adhere to them. If they’re incapable of doing that, they should get rid of this privilege before someone files a lawsuit. 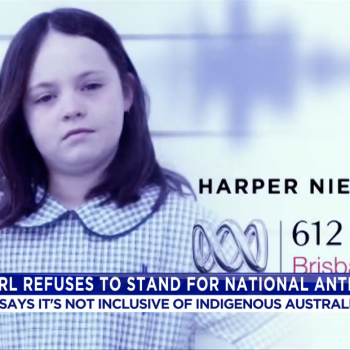 September 12, 2018
Australian 4th Grader Gets Detention for Refusing to Stand for National Anthem
Next Post 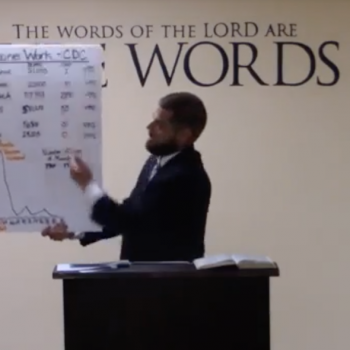