Chino Valley (CA) School Board Member: “It Wasn’t Hitler That Was Bad…”

Readers of this site are familiar with the Chino Valley Unified School District (in California) because of its completely irresponsible Board of Directors. The majority of the five-member board promoted Christianity at meetings, were sued over it, eventually lost, and were on the hook for more than $200,000 in legal fees. They appealed the decision and lost again. We don’t know how much that will cost them. And then they decided to appeal yet again to the Supreme Court, a decision that will further screw over the students they’re supposed to be helping.

My point is that these are not smart people. And the worst of the bunch is Andrew Cruz, a conservative Christian who once trashed gay marriage, invoked the Confederate Flag, argued that racism was over, and complained about California’s mandatory vaccination laws — all in one speech. Another time, Cruz brought up the Charlie Hebdo massacre to defend prayers at board meetings.

During a rant against transgender rights, gender-neutral bathrooms and abortion — you know, typical fare for a school board meeting — he found a way to let Hitler off the hook.

… Common sense tells you — the sermon tells — the direction of our country. So we have to give parents rights. Even though there’s policies that tell us not to, forget that.

You know, Hitler, with Germany, it wasn’t Hitler that was bad. It was the people that followed the laws and the agenda. And it went further and further and went out of control. Local [control] is so important. And we take charge for our own community and for our own kids…

(Zoom in on the reaction from the board member in the middle of the screen. Priceless.)

I’m going to go out on a limb here and say, yes, Hitler was bad. Very bad, even. Kind of a monster, that guy.

You know, the gist of Godwin’s Law is that you eventually compare your opponent to Hitler. I’ve never seen anyone minimize Hitler’s atrocities in defense of his own position.

David Allen of the Inland Valley Daily Bulletin couldn’t believe what he heard:

… I have to say I’m a little surprised we’re having this discussion. I wasn’t aware we had to make a choice between who was bad, Hitler or the rank-and-file Nazis. I assumed, perhaps naively, that they were all bad.

Is this really the line of thinking by an elected official in the bucolic Chino Valley, that Hitler was a poor, misunderstood fuhrer and events spiraled away from his original vision?

He added that he wasn’t alone in his shock:

Among those venting online is Bill Klein, who posted Cruz’s Hitler comment on the Chino Connects Facebook page. Klein wrote: “In my 35 years in the Chino Valley, including eight years as a CVUSD Board Member, I’ve seen many strange things; however, I have NEVER, EVER seen a Nazi sympathizer in an elected position.”

Here’s some good news, though. There are three board members causing all the problems here: Cruz, James Na, and Sylvia Orozco, all of whom are members of the Calvary Chapel megachurch. There are two sensible board members, including a woman named Pamela Feix (a.k.a. the woman in the middle of the screen).

Feix and Orozco are retiring this year and elections for their replacements take place on November 6. It is theoretically possible to vote in two people who aren’t Hitler sympathizers and put an end to this entire charade. For the sake of the students, maybe Chino Valley citizens can get their act together and stop putting awful people like Cruz in power.

(Thanks to Becky for the link) 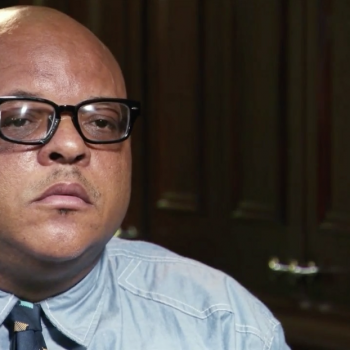 September 12, 2018 Maryland Taxpayers Are Paying Millions to Religious Schools Without Oversight
Browse Our Archives
What Are Your Thoughts?leave a comment