Nun Who Was Allegedly Raped by Bishop is a “Prostitute,” Politician Says September 9, 2018 David Gee

Nun Who Was Allegedly Raped by Bishop is a “Prostitute,” Politician Says

An Indian lawmaker said a nun who was allegedly raped by a local bishop is a “prostitute,” questioning her character even as police investigate the repeated sexual assaults. 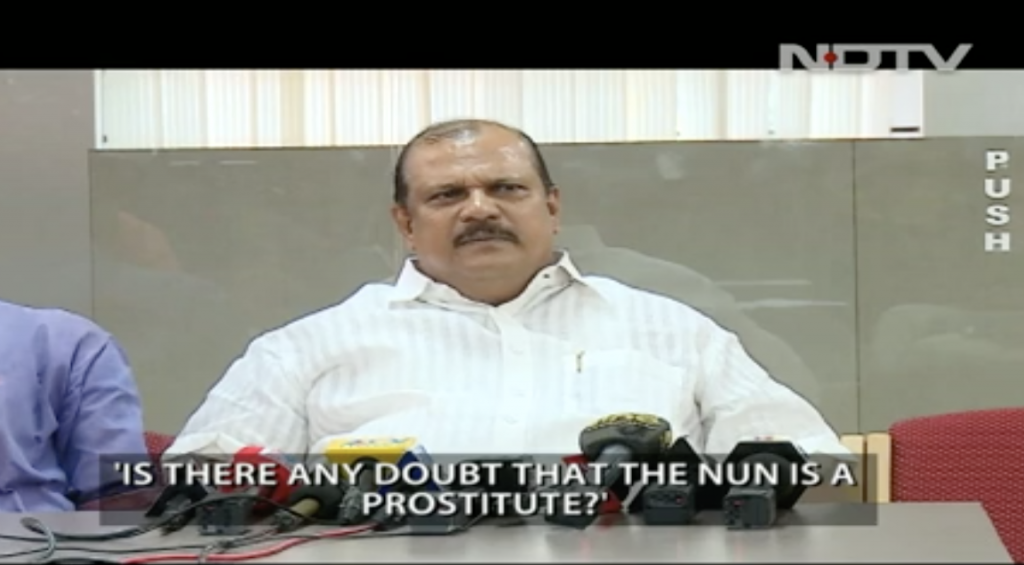 Plathottathil Chackochan “PC” George sided with Bishop Franco Mullackal, from the city of Jaladhar, who is accused of raping a nun from a convent in Kuravilangad. He also seemed to use every trick in the book to undermine her experiences.

In an interaction with media, PC George questioned the character of the nun and called her – a prostitute.

“Is there any doubt that the nun is a prostitute? 12 times it was pleasure, 13th time it became a rape? Where was she when it happened 12 times? Whom is she telling this to? Why did she not complain on the first time it happened?… Let the three sisters be examined. Let us see if they are holy,” said the lawmaker from Poonjar, while speaking on the charges against Bishop Mullackal.

George is suggesting that unless a woman speaks up the moment she’s assaulted, her allegations should never be taken seriously. If she didn’t complain before, she must have wanted it.

Not only is George attacking a victim by calling her character into question, he’s not supporting the investigation and the law. And he’s doing this as a handful of nuns from the same convent are protesting the bishop, saying he “roams free” after a 74-day investigation.

Five nuns joined the alleged victim’s family in a protest in front of the Kerala High Court in Kochi. They say the church, the government, and authorities are protecting the bishop because he has money.

“We have not got justice from the church, the government or the police,” the aggrieved nuns said, explaining the reason behind their decision to take their protest to the streets.

They said it was 74 days since the investigation began and the bishop has continued to roam free. “Is it because he has money and power that he cannot be arrested?” asked the nuns.

The nuns and other protestors held up placards with slogans against the bishop. One of the placards read, “Arrest the bishop who has broken the sixth commandment”, referring to the commandment from Christianity’s Ten Commandments which says one shall not commit adultery.

Sebastian Paul is right. Affairs are consensual. Rape is not. And the nuns shouldn’t have to stage a public protest to get police and politicians to take them seriously.

September 9, 2018 Lehigh County (PA) Claims Its Christian Logo Isn't About Promoting Religion
Browse Our Archives
What Are Your Thoughts?leave a comment