Catholic League: Satan Molested All Those Kids in Pennsylvania

The Catholic League’s Bill Donohue has been on a tear lately trying to discredit the Pennsylvania grand jury’s report documenting hundreds of examples of Catholic Church leaders sexually abusing children.

He’s argued a lot of it shouldn’t even count since some victims weren’t penetrated and many weren’t even pre-pubescent. He’s said sexual abuse occurs elsewhere, so the Church’s scandals aren’t really that big a deal. He said most of the abuses didn’t occur in the past few years, so everyone needs to lay off. He said Church leaders deserve credit for all the children who weren’t molested.

And since none of that is working, he’s trying once again. This time, he’s blaming Satan for making the pedophile priests do all those horrible things.

When we read that a cardinal asked young seminarians to sleep with him, thus corrupting them before they became ordained, and when we read that a few Pennsylvania priests used sacred objects like the crucifix to molest their victims, we cannot plausibly say that this is simply the work of men gone bad. No, it is the work of the devil. What other source would provoke such monstrosities?

If Satan tempted our Lord in the desert, he is surely capable of tempting the clergy, and sometimes winning. Archbishop Fulton J. Sheen put it well when he said, “Satan stations more devils on monastery walls than in dens of iniquity, for the latter offer no resistance.”

This is how Donohue operates. It’s the No True Scotsman fallacy all the time. The moment a Catholic priest crosses the line, he must not have been truly Catholic. In this case, he was under the spell of the devil. There’s never any acknowledgment that the priests were just flat-out monsters and that the Church itself, through its policies and secrecy and hierarchy, allowed this abuse to continue for decades.

At some point, he’ll get around to blaming the kids for seducing the priests, or feminists for making the priests feel inadequate, or Democrats for not doing enough to protect victims of abuse in all circumstances… Given all the places he’s pointing his finger, you’d think he’d eventually end up pointing in the right direction. 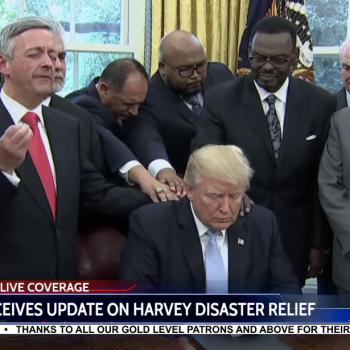 August 31, 2018
Americans United Says Trump Needs To Shut Down His Evangelical Advisory Board
Next Post 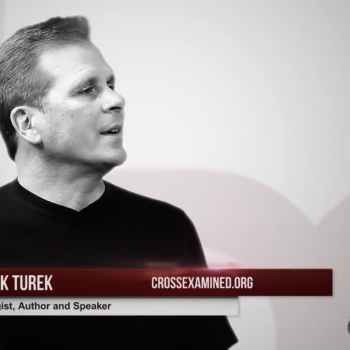