It’s everyone’s favorite kind of sermon: The one where a pastor insists that an ardent atheist found God on his deathbed… without providing any actual evidence of that religious transformation!

This one, celebrated by Christian news outlet Charisma (which never fact checks what it posts), comes from Pastor Kathy Melson at rez.church in Colorado.

She told the (very empty) crowd about a story a fellow pastor told her — so you know it’s true — about some dude named Jerry who was totally dying but [insert miracle here] then he accepted Jesus into his “cold dead” atheist heart.

There’s more at the 15:00 mark in this video or just watch the clip below.

… Crazy things are happening. Pastor Becky told us at a staff meeting a couple of weeks ago about a story of a man — neighbors that she knew — husband and a wife. The husband was dying, and this couple was not a churched couple. Had never been in a church. Had never wanted anything to do with Jesus or God. But the husband was dying.

Long story short, it turns out that some way — we don’t really know how — some way or another, this man named Jerry, who doesn’t know Jesus and is dying, has some kind of an encounter with God in his hospital room!

His wife walks in the next day, and he is a different person. He’s saying things like, “Praise the Lord” and “Hallelujah!” Nobody that’s not churched does that unless you have an encounter with God! And when she told that story, I leaned over to my husband, I said, “David, that’s awakening! That’s awakening! That’s God awakening people! That’s the Holy Spirit touching them and saying to their cold dead heart, ‘You need Jesus! You need Jesus!'”

“Long story short” is the Christian version of “yada yada yada.” You can’t yada yada over the most important parts.

Charisma somehow turned that story into one about a “Hardcore Atheist“… even though we were never told that Jerry was an atheist. Not going to church doesn’t mean you automatically reject God. A lot of believers just don’t like church.

Anyway, this never happened. I’m certain it never happened, because this sort of thing never happens. And pastors lie. Without better proof, don’t believe a thing they say. 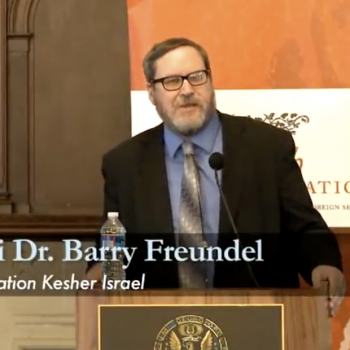