Pope Francis will be visiting Ireland on Saturday, marking the first time in nearly 40 years that a pope has visited the country, and it should be interesting to see what he says about the sexual abuse scandal given that his recent message to Catholics was heavy on prayer and fasting and light on actual solutions.

Because this is a high profile visit, a lot of roads will be closed in Dublin, which means staffers at St. James’s Hospital need special passes in order to get through the blockages. That’s all well and good, but check out the passes they’ll all be getting: 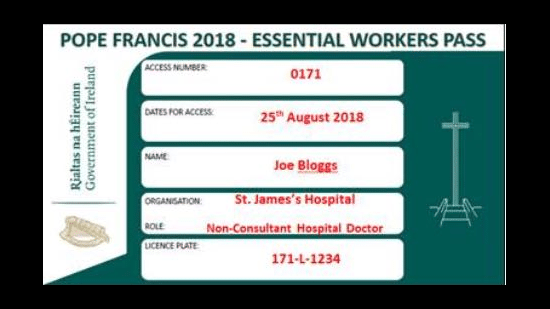 That would be a Christian cross on the far right, and that symbolism is upsetting to non-Christians and atheists who work at the hospital but feel this is government promotion of religion.

One senator, Lynn Ruane, even shared on Twitter how she had received multiple complaints to that effect:

I have been contacted by employees at St James's Hosp who are disgusted that they are required to wear a badge with a crucifix on it. They were told they can't go to work without it. We have such a diverse work force in hospitals of varying religions & none. Disrepectful pic.twitter.com/LxY3BbExxU

Disrespectful! Look at that! A government official who doesn’t believe it’s her job to promote religion! (I miss that.)

Ruane went on to say this was unnecessary.

The pass should not have religious symbols. Could have simply said Pope Francis International Event. So many have been hurt by the church. The churches symbols shouldnt be a necessity for them to enter their work place. The repect goes both ways I think.

She was alone in her complaints. Here’s Dublin Inner City Councillor Gary Gannon:

Entirely inappropriate that this weekend, medical professionals, public servants of various faiths & none, will be unable to attend work unless they display a big Catholic Cross upon arrival.. This is not normal. Separate Church and State. pic.twitter.com/6LkYTHod9x

The Office of Public Works says it’s logistically impossible to issue new passes before this weekend, so the cross will stay, but it’s still important to hear people raising their concerns about this. Following the recent abortion referendum, and child abuse report, and Magdalene Laundries discoveries, this protest shows you just have far removed many Irish citizens have become from the Catholic Church.

They’re ashamed to ever hold a work pass with the Church’s symbol on it. 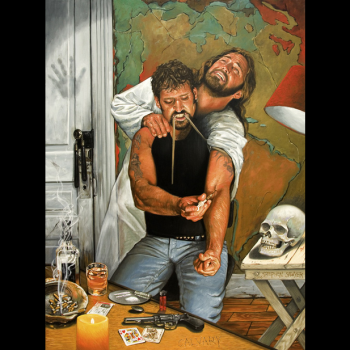 August 24, 2018 Christian Who Doesn’t Understand Addiction Says God Told Him to Paint This
Browse Our Archives
What Are Your Thoughts?leave a comment