Man Yelled “Jesus is Coming!” Before Stabbing His 16-Month-Old Son to Death

A Texas man reportedly yelled “Jesus is coming!” before stabbing his own 16-month-old son to death.

In what almost seems like an attempt to prove how dangerous religious ideas about the afterlife can be, the man reportedly beat and stuck a knife in his son on Sunday in the courtyard of an apartment complex. The local police captain, Jesse Hunter, said the boy died at the hospital.

According to Hunter, witnesses told police that the man carried the child out of an apartment and yelled “Jesus is coming” before the attack.

Dallas TV station KDFW reports that a neighbor watching from a second-floor balcony shot the suspect in the leg, ending the attack. Police say the neighbor will not face any charges.

A “good guy with a gun” tried to stop the attack, but it was too late, and the young boy is now dead… primarily because of religious beliefs that were clearly taken too seriously by this man.

We don’t know about the suspect’s mental health, but that issue is almost always raised in situations like this. It’s often hard to distinguish between sincerely held beliefs that lead to violence and voices in one’s head. Needless to say, it’s not out of the question that religion motivated the man’s attack. He may even argue that he was trying to save his son before the impending apocalypse. Either way, the baby is dead, and the suspect will head to jail after getting treated at a local hospital.

This is an incredibly sad story, and my hope is that we can have a world where this type of thing never happens because mental health services and understandings of ancient religious principles and beliefs are improved.

(Thanks to Brian and Scott for the link) 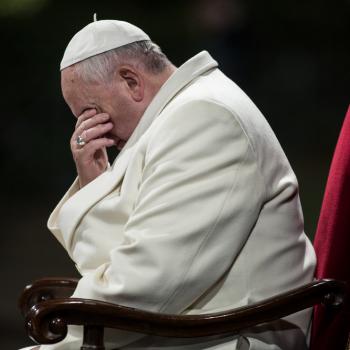