Pastor Claims in Documentary That Jesus Healed Her Son’s Autism

Conservative Christian pastor and conspiracy theorist extraordinaire Rodney Howard-Browne is best known for his “Holy Laughter”-based religious ceremonies, but he just released a YouTube “documentary” called The Great Awakening, and it included one woman who claims Jesus healed her son’s autism.

Martha Cabrera, an associate pastor of the River at Tampa Bay Church (which Browne co-founded), tells her story at the 31:03 mark.

The doctors told us that we couldn’t have kids. And in itself, the testimony is that the Lord healed me and I was able to have my first son. And so I took him to have his three-year-old vaccinations. And within two weeks, he stopped talking. He stopped playing with children. He stopped — his fine motor skills were just not functioning like they were before. And so I go back to the doctors and they want me to have him diagnosed autistic.

And I was like, “No. Absolutely not. I’m sorry I cannot come into agreement, because God’s report tells me that he is well.”

And so one day, we come here to church. And Pastor Rodney is ministering, and he decides to call all the children in so that he can lay hands on them.

We start walking off to the parking lot, and my son tugs on me. And he says, “Mommy. Jesus touched me.”

“Baby, Pastor Ronny’s not Jesus!” He corrects me, and he says, “No, mommy. Pastor Rodney’s over there” — and he points to the building — and then he points up to Heaven and he says, “Jesus, dressed in white, touched me like this [points to forehead].”

And I just grabbed him. I’d spin around in circles. I start laughing. I start screaming. I start yelling. I just — everything that we had prayed for, in an instant, had just come true for us, because we believed what the word of God said.

[Joseph:] Thank you, Jesus, for healing me. 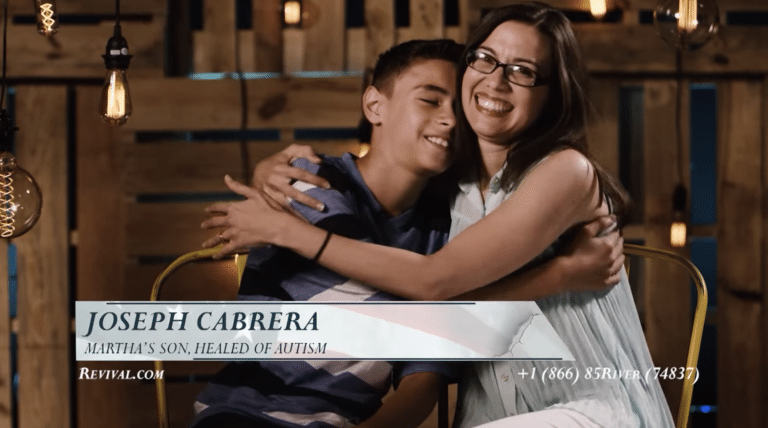 There’s so much wrong here… the least of which, as many parents of autistic kids will tell you, is that the diagnosis is a problem that needs to be cured.

Cabrera also implies, falsely, that vaccines were the cause of her son’s autism. No such link has ever been established.

Finally, we don’t actually know that the autism magically disappeared or that the diagnosis was correct to begin with. As with any televangelist who claims to help “heal” people, no medical records are available to confirm any of this. No doctors’ names are given either, so we can’t hear their versions of the story either.

It’s also cruel, really, to suggest that God fixed a problem in her life when other Christian parents praying for the same outcome will never get it. Is that a testament to their lack or faith, God’s will, or the harsh reality that God doesn’t solve medical problems?

Not that Cabrera cares. Who needs confirmation when you have sincere testimony? 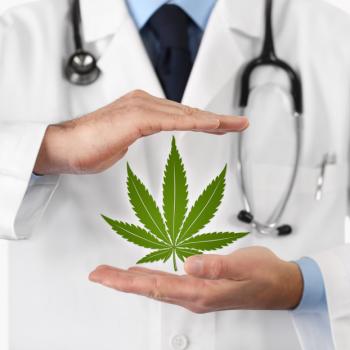