Christian Evangelist: Anyone Who Dies Isn’t “Operating in the Laws of God” August 16, 2018 Hemant Mehta

Christian Evangelist: Anyone Who Dies Isn’t “Operating in the Laws of God”

Now he’s saying that if you die, it’s totally your fault. He made the argument during his livestreaming Bible Study yesterday.

Wommack’s argument is that God has the power to heal everybody. All we need to do is follow His spiritual “laws.” Therefore, people who die must have disobeyed God somewhere along the line.

… God is not the one who’s failing to heal any single person. God has provided healing. He has generated the power, the power source is on the inside of you, and if you aren’t seeing healing, it’s because you aren’t connecting these wires…

… God doesn’t just heal one person and not heal another person. He has provided healing for every person, but you’ve got to learn those laws and cooperate with them. And if you aren’t cooperating — for instance, this law about what you say. If you’re speaking death and telling everybody, “Man, I think I’m gonna die. I’ve only got a month to live!” You are hung by your tongue! You are killing yourself.

It’s like picking up a wire and then, when you die, people will say, “Why didn’t God heal this person?” God did heal that person! They killed themself by not operating in the laws of God.

Considering the human death rate is literally 100% over time, either the most devout people in the world are ultimately no better, in God’s eyes, than the worst sinners… or Wommack is talking out of his ass.

Since there’s a Bible in front of him, I’ll go with the latter. 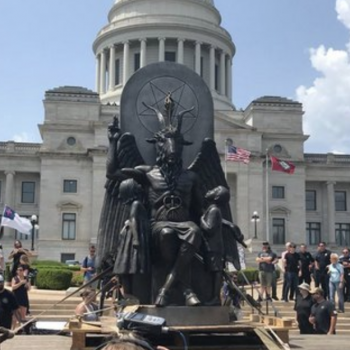 August 16, 2018
A Satanic Monument Was Briefly (But Gloriously) Unveiled Outside the AR Capitol
Next Post