Are you sitting down for this? It’s a long one. But it’s also an incredibly important legal case that shows you just how far public school districts are willing to go to promote religion, and how much work advocates of church/state separation have to do to correct the overreach.

More than five years ago, we learned that administrators at Mountain View Elementary School in Taylors, South Carolina held a “graduation” ceremony inside of a church.

Maybe they could’ve gotten away with that — other public schools have held ceremonies in similar places — but the event’s program didn’t even attempt to shy away from promoting Christianity, listing two separate prayers right in the program.

School officials didn’t just cross the line. They destroyed the line and then prayed to Jesus to patch it back up.

The American Humanist Association’s Appignani Humanist Legal Center sent the district a letter at the time warning them of the consequences of holding future ceremonies in the same location with these prayers.

The District said they wouldn’t “endorse” prayers in the future, but implied that student-initiated prayer would be okay. That might be okay… except in this particular case, a school official had asked a student to deliver the first prayer.

The response also left open a giant loophole: Administrators could always ask students to speak (*wink wink nudge nudge*), knowing that the student population was overwhelmingly Christian and would pray on their own. Considering that these ceremonies were held inside of a church, that gave students even more reason to recite a prayer in their speeches. (Hell, that could be part of the reason those students were selected.)

In September of 2013, the AHA filed a federal lawsuit on behalf of the family of a Mountain View Elementary student against the Greenville County School District and multiple administrators claiming that the District violated the Establishment Clause through their actions.

“The federal courts have been clear that events like these violate the constitutional principle of separation of church and state,” said Monica Miller, an attorney and legal consultant with the Appignani Humanist Legal Center. “Any event sponsored by a public school must not violate that principle.”

They also pointed out the problem with the venue. When there are alternative, acceptable spaces for an elementary school graduation readily available, there’s no reason to hold it in a church on a Christian campus with a motto like “Christ makes the difference” and a logo like this:

The initial ruling finally came down in May of 2015, with U.S. District Judge Bruce Howe Hendricks saying there was no evidence of anything illegal going on and that the District “ha[d] gotten it exactly right.”

Hendricks said the AHA was right about the illegality of the prayer policy prior to 2013, but didn’t go that far with regards to prayers at future graduation ceremonies since they would be student-initiated. Furthermore, the judge said the family filing the lawsuit didn’t have proper standing to bring the case. He didn’t say anything about the church venue for the ceremonies.

The AHA appealed the decision. The ruling, in June of 2016, was a mixed bag.

Here’s what the justices said:

1) The earlier decision was vacated. (Yay!) That ruling in which a judge said there was no evidence of anything illegal going on and that the District “ha[d] gotten it exactly right”? It meant nothing anymore. The justices asked the lower courts to decide the case again (hopefully with a different judge).

2) Standing would have to be reassessed. Because the original students represented in the lawsuit had moved away, the District claimed the case shouldn’t move forward since it was moot. However, the AHA said that it also represented other members whose children still attended the school. The Fourth Circuit therefore sent the case back to the lower court to decide if the AHA’s additional plaintiffs had proper legal standing. On that end, we were kind of back to square one.

The good news was that the AHA had another opportunity to make its argument. They took advantage of it. This past December, the same lower court judge, Bruce Hendricks, ruled in their favor.

In the case of whether graduation should have been held in a chapel? Hendricks said the District never should have done that.

The fact that the district chose to hold the ceremony (which included school-endorsed Christian prayers) in a clearly Christian place of worship in the presence of religious iconography, including, among other things, a cross on the podium and eight stained glass windows depicting Christian imagery, only further created a likelihood that observers would perceive the district as endorsing a particular set of religious beliefs. There has been no showing that the chapel was the only available venue for the graduation ceremony, and in view of the overall circumstances of the event, there can be no doubt that the setting in which the ceremony occurred conveyed a message of religious endorsement and created a likelihood that the school-aged children would perceive a link between church and state.

What about the wink-wink-nudge-nudge “student-initiated” prayers in the future? Hendricks said the policy may be legal in theory, but perhaps not so in practice because of all the winking. He allowed both sides a couple of months to settle their differences on their own. If there was evidence the District was still pushing religion on students after all of that, the AHA was free to sue again.

Nothing appears to have changed, and the AHA is suing again.

In the memorandum filed today, the AHA provided overwhelming evidence (supported by over 70 exhibits) showing that the district is continuing to subject captive student audiences to graduation prayers, contravening Supreme Court precedent, and even violating the terms of the 2015 injunction by using religious language in written programs, encouraging students to pray, and asking audiences to stand for explicitly Christian prayers. “The school district has demonstrated it is either unable or unwilling to respect the constitutional rights of religious minorities, requiring serious court intervention,” [attorney Monica] Miller stressed.

The documents they filed are lengthy, but it’s easy to see the overwhelming amount of evidence the AHA has suggesting prayer is still being promoted in this District.

My favorite may be that, while some schools replaced “Invocation” with “Opening Remarks” in their graduation programs, they still had “a separate, redundant ‘welcome.'” Why have two “welcomes” unless one of them was always meant to be a prayer?

It’s absurd that this District continues getting away with this even after being reprimanded in an earlier lawsuit. They won’t learn unless a judge rules definitively in the AHA’s favor. 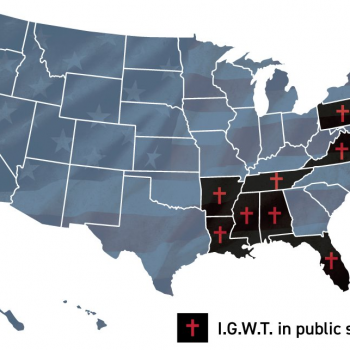 August 12, 2018
8 States Now Encourage or Require Schools To Put Up “In God We Trust” Signs
Next Post