A high school student spoke up about the inappropriate “health” advice she got from a faith-based group, and the school board was so “horrified” by what they learned, they’ve launched an investigation.

Abby McElroy, a senior at Strath Haven High School in Pennsylvania, told the Wallingford-Swarthmore School District last month that Amnion Pregnancy Center provided inaccurate information about birth control — and even gave a girl a Bible — when representatives spoke to her health class. 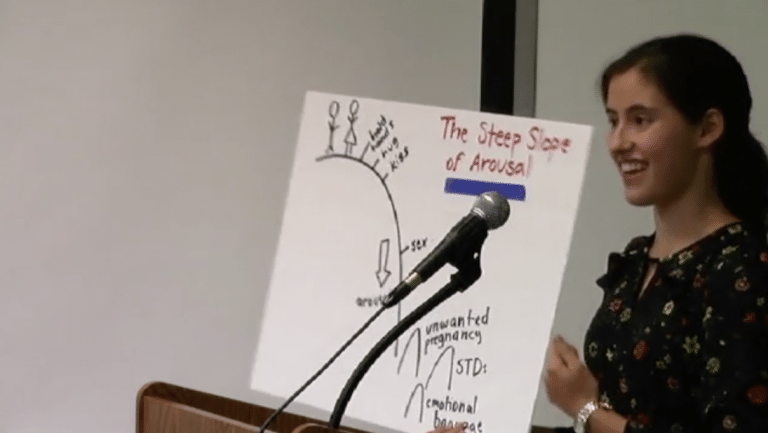 McElroy’s activism also caused more than 500 people to sign a Change.org petition against the center’s future invitation to the school.

School board members “were horrified — none of them had any idea that this was going on,” said McElroy, who showed up at their July meeting with a poster board copied from Amnion’s presentation, titled “The Steep Slope of Arousal.”

The poster showed two stick figures holding hands at the edge of cliff — part of Amnion’s RealEd “relationship education” program that contends that even hand-holding, hugging, and kissing can cause teens to fall into the abyss and crash on the rocks of sexual activity.

McElroy told the school board the presentation had encouraged abstinence not just from sex but any touching in order to conserve oxytocin, a hormone that is released during sex and activities like cuddling. The claim that too much youthful activity depletes oxytocin and thus makes it harder for a person to eventually bond with a future spouse has been challenged by scientists, who say it’s based on research with prairie voles, not humans.

That wasn’t the only jaw-dropping visual aid:

Another element of the center’s presentation, according to students who attended, was a piece of sticky tape; the teens were told that “if you have sex with too many people it becomes less sticky — and you can’t make healthy relationships,” McElroy said.

If you’re thinking, “That doesn’t make any sense,” you’d be right. That’s not how sex works. After all, if you wait until marriage, then have sex with the same person all the time, wouldn’t the tape also become less sticky in that situation? (Also, which body part is the tape even supposed to represent?!)

That’s the same kind of warped logic that argues a woman who has sex with a few different guys before marriage is “loose,” but a woman who has sex with one guy after marriage a lot is not. There’s just no logic behind the idea that having sex with multiple people makes it harder to have a serious relationship later on — just as it’s silly to assume people who wait until marriage to have sex are always #blessed with a perfect one.

This advice is bad, faith-based, and unscientific.

Who invited these people to the school?!

Amnion’s executive director Melanie Parks insists, of course, that the program isn’t based on any religion… even though they proudly and routinely make references to Christianity on their website and social media outlets:

Still, Parks insists religion isn’t at the core of what they do.

[Parks] said that [their sex-ed program] encourages young people to think critically about sex and relationship choices, that the discussion of oxytocin was taken out of context by the student, and that the information in the program “was presented accurately.” She denied that a student was given a Bible.

The controversy over the role of Amnion — which quotes the Bible on its website, accepts grant money from the socially conservative Christian Focus on the Family and has a stated goal of ending abortion in the Philadelphia suburbs — highlights the ongoing ambiguity over how sex education is taught in Pennsylvania public schools.

McElroy first drew attention to this awful group as a sophomore. When she told the principal about her concerns, she was assured they wouldn’t be invited back. Then they were. (The principal no longer works there.) Hopefully the District will take the investigation seriously and give these students the education they deserve. That means never allowing these misguided people in front of the kids.

Kudos to McElroy for being proactive in exposing this group and letting people know what’s happening inside the building. Her next goal is to continue similar activism at other districts that partner with “crisis pregnancy centers.”

You can check out her presentation to the school board around the 20:20 mark of the video here.

(via Daily Kos. Thanks to Brian for the link) 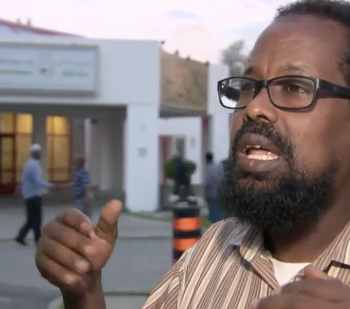 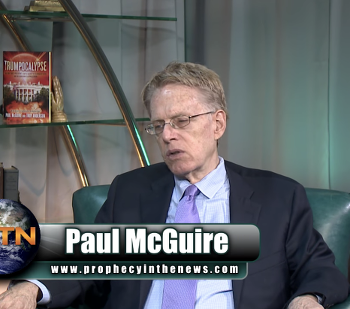