Canada just did what we almost never see in the U.S.: They stripped a place of worship of its tax-exempt status.

This case involves a mosque in Ottawa that was found to be promoting hate speech in violation of charitable status guidelines.

The Canada Revenue Agency (CRA) has revoked the charitable status of the Ottawa Islamic Centre and Assalam Mosque on St. Laurent Boulevard over allegations it promoted “hate and intolerance.”

The CRA said the organization failed to devote all its resources to charity and “allowed its resources to be used for activities that promote hate and intolerance,” causing it to fail the CRA’s public benefit test.

The controversy involves four people who spoke at the mosque between 2009 and 2014. While they didn’t make hateful comments at those appearances, they were known as people who spread hate, which amounts to the same thing under Canadian law.

He was one of the subjects of a Channel 4 documentary called Undercover Mosque that included secret recordings of his sermons at Green Lane where he spoke in derogatory terms about non-Muslims, called women “deficient” in intelligence, and said gay people should be thrown from mountains.

Rageah is founder and leader of the Journey of Faith Conference, which has invited controversial hardline speakers to Canada, at least one of whom — Mumbai imam Zakir Naik — was refused entry to Canada for past statements such as, “Every Muslim should be a terrorist.”

Another, Bilal Philips, had been deported from several countries.

And then there was this guy:

The fourth speaker mentioned by CRA is Abdullah Hakkeem Quick, an American preacher who was cited for his references to the “filth” of yahud (Jews) and kafirun (unbelievers), and for saying that the Islamic answer to homosexuality is death.

The mosque leaders say it’s unfair to penalize them for remarks made in other places and associations they don’t necessarily approve of. Furthermore, while a different speakers’ policy allowed those people to spread their teachings, the vetting process is now much more strict.

But the CRA says the damage is already done:

“The Organization, by allowing these individuals to make use of its facilities, and to speak to an audience consisting of its parishioners, is providing its guest speakers with a de facto endorsement,” said the auditors.

They were also critical of the board’s “passive approach” to speakers, relying on suggestions from members of its congregation, and “often approving speakers without any knowledge of the content of the lectures that were to be delivered, and in some cases allowing speakers to attend the mosque against the board’s wishes,” according to the documents.

“The Organization acknowledged that it allowed its premises to be used by individuals and groups with extremist views. The Organization recognizes that certain people made decisions about guest speakers and lecturers without appropriate due diligence and oversight.”

The mosque has the opportunity to appeal the decision and file a legal complaint if they don’t like the first result. But it’s a lot of time and money. In the meantime, the revoking of their charitable status could put a halt to their fundraising.

You may think that these mosque leaders have a point: Why should they be punished for something a guest speaker said somewhere else? But the tax-exempt status was given to them, contingent on the idea that something like this would never happen. It’s not the first time this has happened. Several years ago, a Christian church lost its charitable status after the CRA found that they were spending more than 10% of their time on “non-partisan political activities.”

Kudos to the government agency for taking its job seriously, even if the laws are applied differently up north. It’s too bad the IRS can’t take the same actions even when baited with videos from sermons in which the pastors endorsed someone for political office.

August 11, 2018
These Christians Just Realized They Face Life in Prison for Killing Their Baby
Next Post 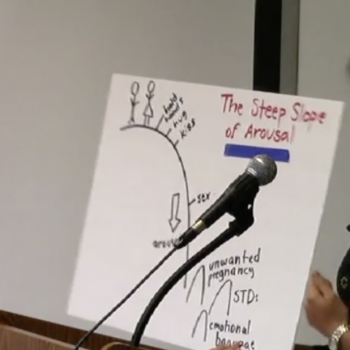