This may sound crazy, but The Satanic Temple’s decision to use a First Amendment lawyer who has also represented neo-Nazis — a choice that led the group’s Los Angeles branch to separate itself from the organization — wasn’t a bad one.

Let me back up.

On Tuesday, Jezebel’s Anna Merlan posted a lengthy story about the internal controversies involving The Satanic Temple, including the drama involving the LA chapter, but the divisiveness for members really began when Twitter suspended the account of TST co-founder Lucien Greaves earlier this year.

Greaves says it was a case of religious discrimination and wanted to sue Twitter, but he couldn’t afford an expensive attorney who specialized in free speech — or at least he didn’t feel that was a good allocation of funds. But then he was contacted by Marc Randazza, an attorney whose clients have included a neo-Nazi publisher, several alt-right figures, and even Alex Jones. 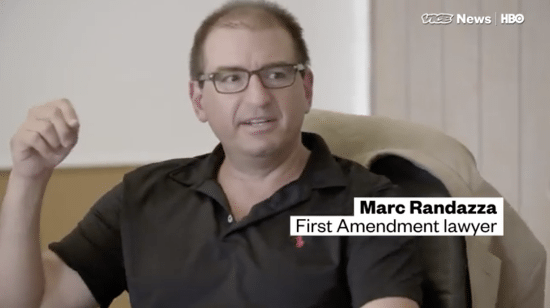 The incident began when former child-actor Corey Feldman started ranting about “Satanic nutbags” and retweeted a call to burn TST’s headquarters down. Greaves announced his intention to sue after Twitter, for some reason, temporarily deactivated his account following Feldman’s rant, instead of suspending Feldman or the Twitter user calling for the headquarters to be burned down.

TST alleges that Twitter’s behavior amounted to religious discrimination and announced they had filed a complaint with the Massachusetts Commission Against Discrimination in May, represented by Randazza…

The Los Angeles chapter didn’t like the decision to use Randazza because of that — even though he offered his services for free and there weren’t other options. They ultimately withdrew from The Satanic Temple and renamed themselves The Satanic Collective.

They wrote, “This decision was reached after months of deliberation in the wake of The Satanic Temple Executive Ministry’s decision to pursue a religious discrimination claim against Twitter.”

They also decried the use of Randazza as an attorney, writing, “We view Marc Randazza as a Twitter troll and an agent of the alt-right. He is not a neutral actor with no political motivation of his own; he is an ally to Nazis and to alt-right provocateurs.”

That gut reaction is easy to understand. Why work with someone who wants to defend people like that? At the same time, this case needs a little bit more context. After all, Randazza is an attorney who is doing this for free, and Greaves himself said in a statement on Aug. 6 that his group couldn’t really afford to be picky.

Laughably, some concerned well-meaning members asked if we hadn’t tried to reach out to the ACLU instead. I explained that the ACLU is no better, as they’ve defended Nazis, the KKK, the right to display the Confederate Flag, etc. Further, I explained that the notion that we “choose” our lawyers at all is a bit misguided. Many lawyers can’t (due to case load or scheduling) or won’t (for whatever reason) represent us, and it’s very difficult in any circumstances to find pro bono (free) support. When Twitter suspended my account and The Satanic Temple’s account at the same time, in an apparent case of Religious Discrimination, the lawyer who’s fighting our case now reached out to us offering pro bono support. All we knew was that he was a successful $700 per hour lawyer with a solid history of court victories. That’s all that mattered.

He isn’t wrong. Anyone who represents people on grounds of free speech is going to end up with some unsavory clients, through no real choice of their own. Indeed, the people who need free speech protections the most are those with unpopular opinions. The ACLU has even faced internal controversies because of its decisions to defend those organizing the infamous white supremacist rally in Charlottesville, Virginia that eventually led to riots, injuries, and one death. Does that mean we should turn against the ACLU, or accept the idea that defending free speech sometimes means defending speech we find abhorrent?

That’s Randazza’s argument, anyway. He’s not a Nazi himself but he’s something of a free speech absolutist. He has also represented a diverse group of clients, he told me in an email interview.

When I first started studying law, I looked back at how conservatives behaved during the red scare and I thought, had I been there, I would’ve stood up. Well here i am.

Incidentally, Randazza is also representing Freethought Blogs, The Orbit, PZ Myers, and several other atheists who are being sued for defamation by writer Richard Carrier in an unrelated lawsuit that is still ongoing. The bloggers in question are vocal social justice advocates who, no doubt, have their own disagreements with some of Randazza’s clients.

The point is that Randazza’s position isn’t all that unusual for a First Amendment attorney. He also explained his political beliefs to me, saying he’s “so liberal” that he’s “practically a communist,” and he had some choice words for those who say he must choose a side.

I just refuse to eat from the prix fixe menu of political choices. And I think anybody [who expects] me to be orthodox to any belief system can fucking lick my balls after a heavy work out.

Those are the words of a man who uses free speech liberally, that’s for sure.

Whether you agree with Randazza’s choice of clientele or not isn’t the issue. The question is: Do you support free speech for everyone or just for those on “your side” of an issue?