We know Ark Encounter, the Noah’s Ark theme park in Kentucky, doesn’t have the number of visitors its creators always predicted they would have. They were projecting millions of people coming in per year… and the second year’s ticket-buying attendance was a relatively pathetic 862,491.

We also know Creationist Ken Ham said attendance was over a million to the press, then later explained that discrepancy by saying kids and holders of lifetime passes got in for free. Which amounts to a lot of free tickets…

But after several media outlets reported that the attendance numbers were much lower than anticipated — which is accurate — Ham lashed out on Twitter by saying those facts amounted to “fake news.” 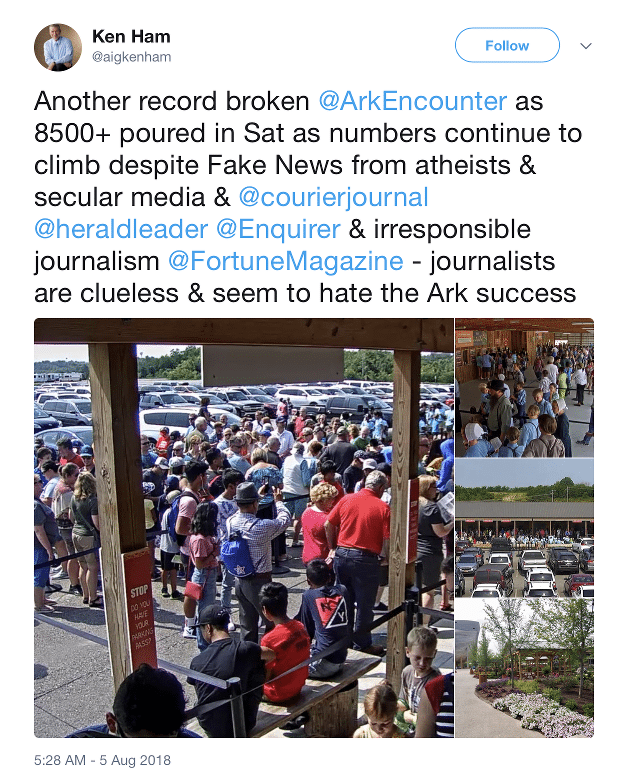 The numbers aren’t fake. They’re literally the attendance figures submitted by Answers in Genesis to the city of Williamstown, which were then obtained through an open records request.

Also, having a good day of attendance on a Saturday in the summer hardly contradicts the fact that fewer people are coming when school is in session or the weather is bad. The good days just don’t make up for the bad ones right now.

It’s never good when the head of a Christian business thinks imitating Donald Trump is the way to win over skeptics. And remember that the people who suffer the most from the Ark’s lower attendance rates are the local business owners who were counting on more tourists and the city officials who bent over backwards with incentives in order to get Ken Ham to build the boat in Williamstown.

If you’re looking for fake news, go see the exhibits in the Ark.

August 6, 2018 Christian-Led CA School Board Wants to Throw More Money at Illegal Prayer Case
Browse Our Archives
What Are Your Thoughts?leave a comment