Christian Group’s Director Claims “Pedophilia is a Part of Homosexuality”

The American Family Association’s Director of Communications for Urban Family Talk, Meeke Addison, thinks she knows how gay people won the right to marry and adopt.

It began by kicking certain political liabilities out of their club so they could win the respect of much of American society.

Who were the liabilities? Pedophiles. Because when you belong to the Christian Right, there’s no distinction between the two.

… One of the groups that they had to marginalize so that they could make political advancement were pedophiles. Pedophilia is a part of homosexuality. We are now looking at homosexuality as if it’s sort of the preference in sexual deviancy, do you understand? This points to the fact that they have so dumbed down and numbed our ability to understand right from wrong, that we’re saying, “Oh my goodness, molesting children? That’s absolutely off the table! We won’t even hear of it!” But we say, “Okay, you want to engage in intercourse, men with men, women with women?”

Naturally, Addison went on to say that pedophiles want back in — and liberals will accommodate them just as they did with gays and lesbians.

She neglects to mention anything about consent. Two adults who want to be together should have that right. That’s the principle that guided liberals in the fight for marriage equality. A child, however, doesn’t have that same kind of autonomy. A child can’t legally consent. That’s why pedophilia is wrong, full stop.

You would think that’s obvious, but as we know, Christian groups like the AFA have no problem lying to their gullible followers. It’s not like lying is a sin, right? 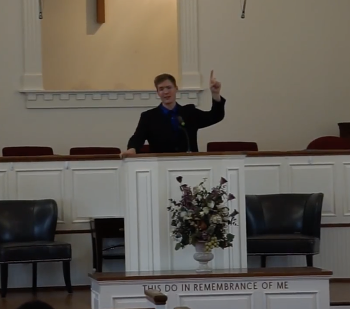 August 2, 2018 ASU Boots Lawrence Krauss from Top Science Job (But He's Still on Paid Leave)
Browse Our Archives
What Are Your Thoughts?leave a comment