The good news from a new Pew Research Center survey is that fewer people than ever before are going to church.

The bad news is that it’s not necessarily because they stopped believing in nonsense. 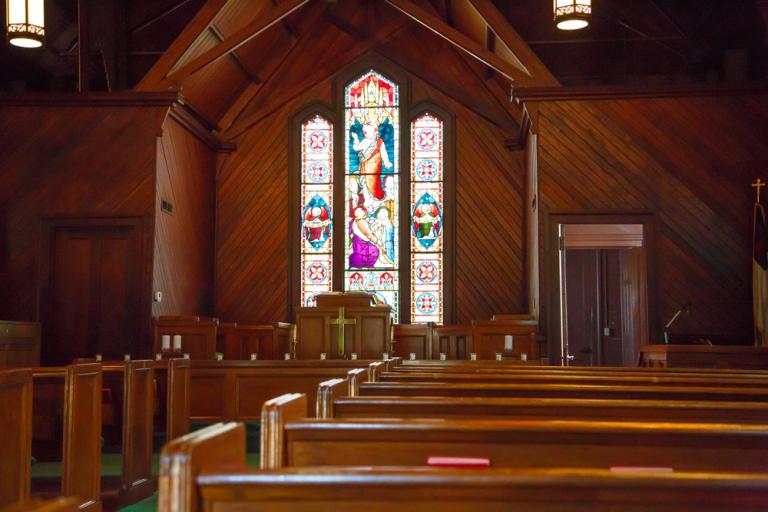 Among adults who only attend church a few times a year or less, only 28% said it’s because they’re not believers. The rest of them aren’t going because, among other things, they practice their faith in other ways (37%) or haven’t yet found a church they like (23%). 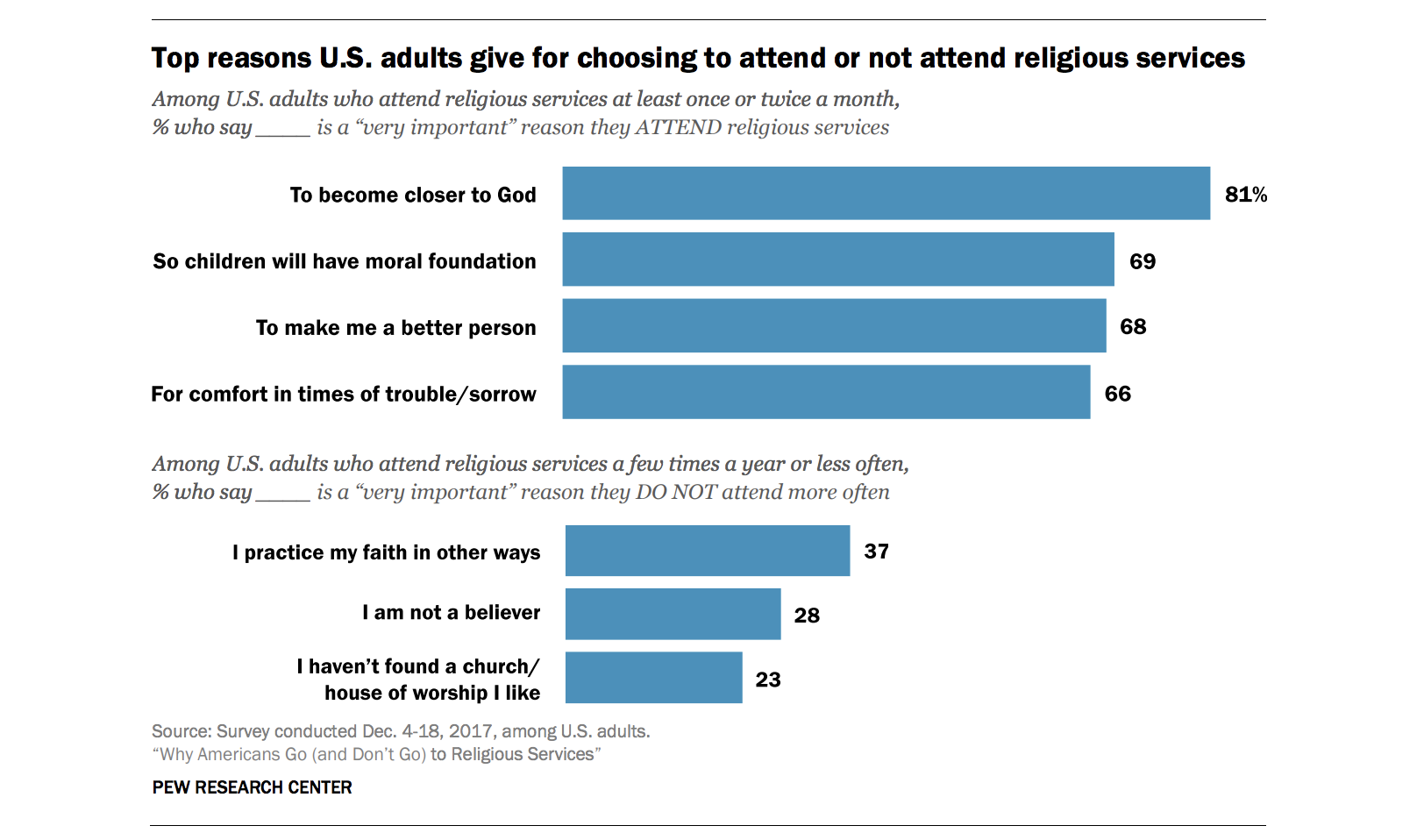 Along the same lines, among those adults who attend church regularly, most had “good” reasons for doing so. It’s not like they were going purely out of guilt or cultural pressure. They said they went to get closer to God (81%), so their kids learn morals (69%), to become better people (68%), or for comfort (66%),

So which groups of non-churchgoers were more likely to say they don’t attend because they don’t believe in God? No surprise there. It’s college graduates, men, young people, and Democrats. (Hello, my loyal readers.) 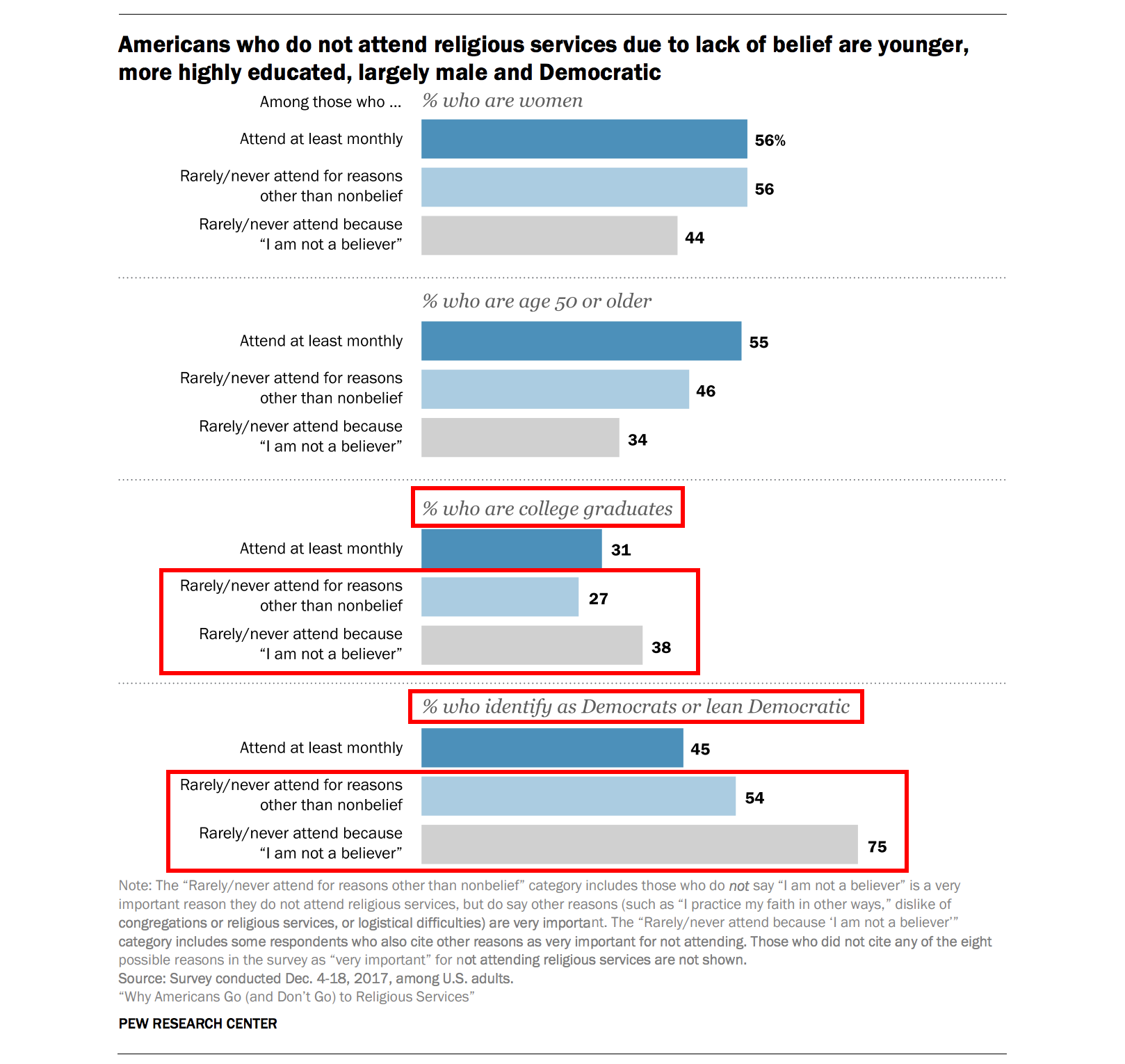 There is one huge takeaway from all this for atheists who care about these numbers. Some of the main reasons people give for going to church is that they want to instill morality in their children, make themselves better people, find comfort, get inspired, be part of a community, and meet new people.

Religion doesn’t — or shouldn’t — have a monopoly on any of those things. While atheists have often struggled to offer meaningful alternatives, it’s not for lack of trying. (Consider all those atheist “churches” that popped up years ago, some of which are still going strong.)

But it’s not all on us either. Many large churches are becoming known for their immoral stances — for their opposition to LGBTQ rights, for pushing abstinence over useful sex ed, for ignoring the climate (and science in general), for sexual abuse scandals, etc. If you want to become a good person, going to church is really an awful way to achieve that goal. And if the only reason you’re good is because you think God wants you to be, then… that’s just disturbing.

If you’re looking for inspirational sermon, though, you can watch a TED Talk instead. Want community and socialization? Find a Meetup group.

The main thing churches have going for them is that they help people get “closer to God” — but even that’s slowly becoming a relic of the past. Hell, just witness what happens when the people who declare themselves closest to God align with Donald Trump and his barbaric, ignorant policies.

Ultimately, the one thing churches do better than anyone else — helping people connect with God — is on the decline as people realize they’ve been duped into accepting religion. There are alternatives for just about everything else, and if those options aren’t fully formed yet, they will be soon enough.

August 1, 2018
Christian “Prophetess”: God Has a Pet Unicorn
Next Post

August 1, 2018 Pastor and “Creation Festival” Founder Gets 18 Years for Sexually Abusing Kids
Browse Our Archives
What Are Your Thoughts?leave a comment