His latest sermon is another screed against gay people… and this one raised an eyebrow because he not only treated all LGBTQ organizations as a monolith, he claimed they were now promoting pedophilia.

***Update***: The video was removed from YouTube. I have included a mirror below:

… [The Bible says] don’t be afraid of their terror. Terror. That word. You know who’s a perfect example of this? The LGBT community!

You say, “Oh, you’re crazy.” Well, you know what? They’re doing marches just about every day, in about every city of America, and The LGBT is trying to — right now, they’re trying to force pedophilia down people’s throats. You say, “Oh, that’s crazy.” Well, you know what they just did? They put out a sign — this is their new sign. It says, “Love is age-blind” and it shows a kid with a bunch of adults.

They’re trying to recruit the children!

And that ought to anger you inside! Hey, if they ever legalize pedophilia, there will be a civil war!

It just drives me nuts…

There’s literally no LGBTQ group promoting pedophilia. If you Google the sign Powell mentions, only one image comes up, and it’s undoubtedly fake. (Some versions of it include the URL for a LGBTQ group’s website. That group doesn’t promote pedophilia.) 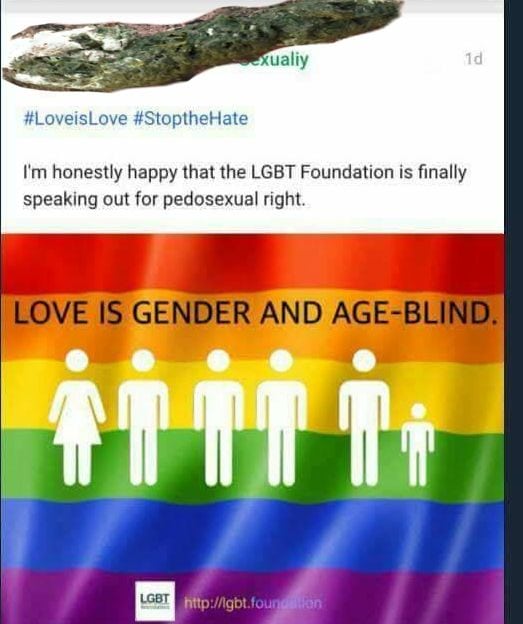 So Powell is using a faked picture linked (falsely) to a single group to claim all LGBTQ people are somehow pedophiles. That level of research would normally cause a child to repeat fourth grade, but it makes this guy a pastor.

Powell went on to slam Islam because Muhammad was allegedly a pedophile for marrying a child… which might be a valid point of criticism, but not from a guy whose own religion is based upon God impregnating an underage woman without consent. 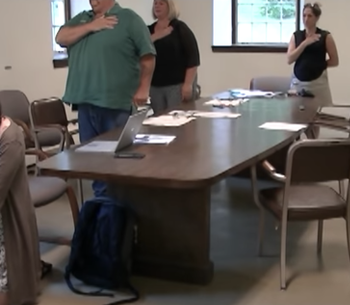 July 30, 2018
An Elected Official in CT Knelt During the Pledge and Set Off a Firestorm
Next Post