Jay Sekulow, Donald Trump’s personal lawyer and a longtime opponent of church/state separation, has apparently been using the Justice Department’s actions related to Planned Parenthood to raise money for his conservative group, the American Center for Law and Justice.

Sekulow, who has previously pressured poor people into giving his groups money and lied about the infamous “collusion” meeting between Donald Trump Jr. and a Russian lawyer, has telemarketers calling people to request money and talk about a government “investigation” into Planned Parenthood. The group for which Jay is raising money has directed millions of dollars to his law firm and family.

Jay Sekulow, a personal attorney to the president, has contracted telemarketers to collect money from the public for his not-for-profit organisation using a script that highlights the justice department’s examination of foetal tissue transfers by groups including the women’s clinic network.

“Planned Parenthood is under full investigation by the Department of Justice for aborting babies and selling their body parts,” the script states, between references to anti-abortion litigation brought by the activist group, the American Center for Law and Justice (ACLJ).

It was unclear from the ACLJ script whether Sekulow was merely repeating past media reports of preliminary inquiries made by the justice department, or if the president’s lawyer had learned of a previously undisclosed full investigation.

Judging by Sekulow’s track record, I’m going to assume he probably wasn’t breaking any news. (That usually requires research.) Instead, he was likely referring to prior reports from last year about the Justice Department looking into claims about Planned Parenthood and fetal tissue sales — a link made in 2015 by a right-wing provocateur who purposely distorted the reality of the situation.

We haven’t heard anything substantial about this federal “investigation,” nor have we seen any evidence that Planned Parenthood had been doing anything illegal at all, but that hasn’t stopped Sekulow from claiming abortion providers are running scared in order to raise money for his group.

Claiming that abortion providers have been put “on their heels”, the telemarketers urge listeners to share their credit card details, asking: “Can I let Jay know you’re standing with him with a gift?” Waverers are encouraged to give smaller amounts…

Citizens for Responsibility and Ethics in Washington, a watchdog group, said Sekulow’s actions appeared to be legal but were troublesome. “It does not look good that the president’s personal attorney is raising money off of the president’s administration’s actions,” a spokesman, Jordan Libowitz, said in an email.

Troublesome is the right word for it. If a lawyer for the president is raising money using the administration’s actions, how can we draw a line between greed-motivated policies and those meant to make our country better for everyone? (As if that latter consideration would even come to mind in this White House…)

Either way, this is only the latest example of a Christian group using lies and White House access to make money. After the recent scandal involved the National Prayer Breakfast, it’s not surprising that another right-wing leader would be profiting off this administration’s anything-goes policies when it comes to conservative Christianity.

July 29, 2018
A California Church Plans to Open Its Own Brewery, Serving Beer During Services
Next Post 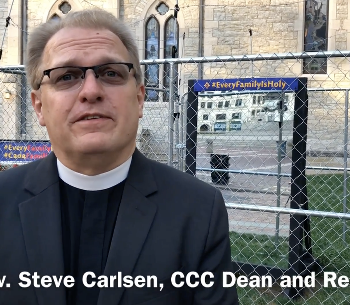