Restaurant Extends Church Discount to All Customers After Atheists Speak Up

A restaurant owner in Ohio decided to boost his business by providing a 10% discount to customers who bring in a church bulletin on any Sunday, but that plan backfired. 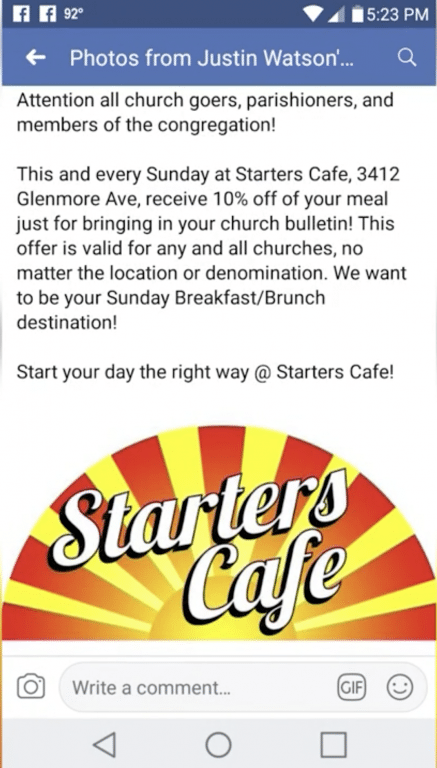 To be fair, it doesn’t seem like the owner of Starter’s Café — Justin Watson — had any ill intentions. His restaurant is surrounded by churches, and he thought a church bulletin discount would be an easy way to get more customers. Bring in the program from a service, get a percentage off your bill. Win-win, right?

“I’m right in the heart of Cheviot on Glenmore Avenue and I have about seven churches within a 1-mile radius,” Justin Watson, the owner of Starter’s Cafe, told NBC affiliate WLWT-TV. “So, I was thinking, what better way to drum up business than to extend an offer to the neighborhood?”

The offer was 10 percent off a meal on Sunday if you brought in a church bulletin. Watson said he didn’t think it would cause a controversy.

“This was the furthest thing from my mind when we came up with this idea,” he said.

This isn’t something new. The same sort of controversy has arisen in the past. In some cases, the owners went even further, offering a discount to those who openly prayed before eating or to those who literally said, “Jesus died for me.”

In this case, local atheists raised their concerns about potential legal violations.

He got angry comments from people who said he was discriminating against the nonreligious.

Someone passed along a form letter from the Freedom from Religion Foundation that told patrons to alert restaurant owners “to the illegality of the practice.”

Jim Helton, the national field organizer for American Atheists, said legality is not always a clear-cut case. How the discounts are applied and other factors are key.

“A lot of the answers in these cases are: It depends. In this case, it was illegal because it was only offered to churches,” Helton told WLWT-TV.

Helton said the discount is different from a senior citizen discount or a military discount because religion or lack of religion are considered protected classes.

The good news is that Watson found a way to keep his discount and stay on the right side of the law.

Instead of nixing the deal, he extended it to everyone who goes to the café within certain hours on Sundays. That should accommodate most church-goers without effectively punishing people who don’t attend. It’s reasonable. It’s fair. And, ironically, it might even work against some churchgoers, if services are held during the time when the discount is offered.

This is how restaurant owners should react. Watson tried doing something he thought was good for business. He learned there was a potential legal problem with it. He found a compromise that satisfied everybody… well, except those who complain whenever religious people aren’t given special treatment. 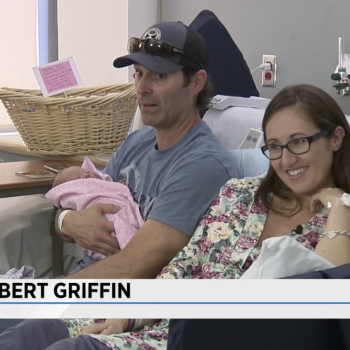 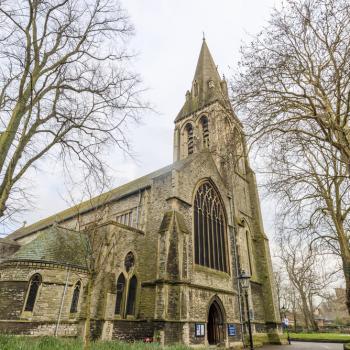