Rick Wiles: Rachel Maddow Sent the Signal for Liberals to Decapitate the Trumps

Christian broadcaster Rick Wiles is really going all in on this idea that Democrats are going to murder Republicans.

A couple of weeks ago, he claimed the purge would occur before 2020 to stop the GOP from voting. This week, he used the “extermination” conspiracy to get money from his followers.

Now he says that MSNBC host Rachel Maddow has given the instructions for an all-out decapitation of Donald Trump and his family.

Here’s what Wiles said Tuesday night on his TruNews show:

… Wiles declared that a recent segment in which Maddow argued that this nation must begin to prepare for “the worst case scenario that Trump is compromised by Russia” was really a signal that a leftist revolution is imminent.

“She was spewing out, last night, calls for revolution,” Wiles said. “She was telling the left, ‘Take a deep breath, we’re at the moment, it’s coming, we’re almost there, we’re going to remove him from the White House.’”

Silly Wiles. As if liberals could ever get that organized… If a coup was possible, it would’ve happened many times over already. But there’s nothing planned. We don’t do violence, we don’t do coups, and we have every right to be disturbed for exactly the reasons Maddow stated.

Unlike conservatives, who frequently refer to “Second Amendment” solutions to anything and everything that’s bothering them, liberals are trying to fix gerrymandering through the courts and urging people to register to vote. It’s a bloodless coup that obeys our laws.

Plus, why would a coalition that includes vegans, anti-gun advocates, and people who want to end the death penalty ever stage a mass decapitation?

No wonder Wiles can’t make sense of it. In Bizarro Christian Land, liberals playing by the rules must be code for something far worse. 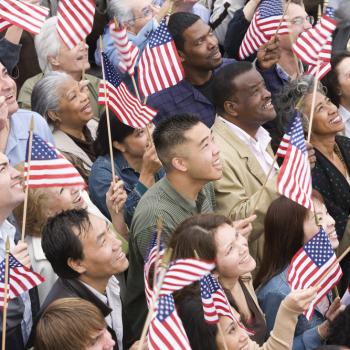 July 19, 2018 A Majority of White Evangelicals Don't Like How America Is Becoming Less White
Browse Our Archives
What Are Your Thoughts?leave a comment