Richard Dawkins is under fire (again) for something he tweeted (again). 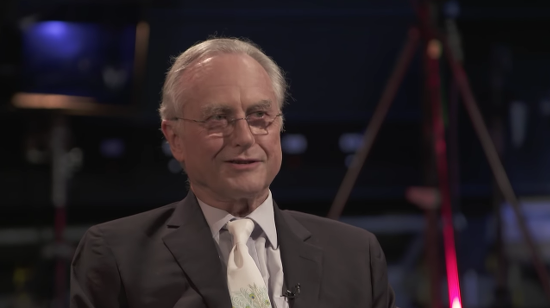 First, let me be presumptuous and explain what I think he tried to do.

On Monday, sitting outside a cathedral, Dawkins wanted to say that the music emanating from the church was beautiful. He’s done this many times before. He even said in a 2013 interview that he had a lot of appreciation for religious music, especially from his own Anglican background:

‘I’m kind of grateful to the Anglican tradition,’ he admits, ‘for its benign tolerance. I sort of suspect that many who profess Anglicanism probably don’t believe any of it at all in any case but vaguely enjoy, as I do… I suppose I’m a cultural Anglican and I see evensong [a religious service] in a country church through much the same eyes as I see a village cricket match on the village green. I have a certain love for it.’

He added that he would “feel an aesthetic loss” if churches went away. “I would miss church bells, that kind of thing,” he said.

I think that’s what he was going for in the tweet. But this is what spewed out instead:

Listening to the lovely bells of Winchester, one of our great mediaeval cathedrals. So much nicer than the aggressive-sounding “Allahu Akhbar.” Or is that just my cultural upbringing? pic.twitter.com/TpCkq9EGpw

Also, yes, it is just his cultural upbringing. I have no doubt Muslims (perhaps even some ex-Muslims) feel a sense of comfort and beauty when they hear their own religious words and music. Dawkins equates those two words with suicide bombers — and only them — when devout Muslims would tell you their familiarity with the phrase comes in a very different context:

Sir, I don't think it's your cultural upbringing. I think you genuinely have no clue what the azaan is or how it sounds. Fine to me if you don't like it but to qualify this as sounding "agressive" is just really, really silly. pic.twitter.com/CgKbfFdLCI

Part of what bothers me about the tweet is Dawkins’ inability to just say something nice about a church without trashing religion. As if people would accidentally think he found God if he only said the bells sounded nice.

But the more pressing issue is that his comment destroys the very narrative prominent atheists like himself have been telling us for years.

Atheists (myself included) often say we condemn religion, but not the religious. We criticize faith, but not the faithful. People deserve respect, but their irrational ideas do not.

It’s not just rhetoric. There are a lot of incredible religious people fighting on behalf of LGBTQ equality, and women’s rights, and against racism. Many church/state separation groups are happy to join forces with them on issues of common concern. We may disagree about God, but we can still work together on our shared goals. Ask anyone who works with those organizations, and they’ll rattle off a long list of faith-based groups who do amazing work on their issues.

It can also be strategic. If you insult religious people, you’re going to have a really hard time convincing them to listen to you when you’re criticizing their religion.

I am often accused of expressing contempt and despising religious people. I don’t despise religious people; I despise what they stand for. I like to quote the British journalist Johann Hari, who said, “I have so much respect for you that I cannot respect your ridiculous ideas.”

He said something very similar last year after a Berkeley radio station canceled an event with him on grounds that they don’t support “abusive speech” and Dawkins had “offended and hurt — in his tweets and other comments on Islam, so many people.” Dawkins responded by saying he criticized “the appalling misogyny and homophobia of Islam” and “the murdering of apostates,” but he would not go after peaceful Muslims themselves.

What’s Dawkins doing? He’s criticizing the way Muslims pray. The words they use. The tone in which they speak.

The media, of course, has picked up on this with some critics accusing Dawkins of “Islamophobia.” That’s a loaded term, often used to stifle legitimate criticisms of Islam itself, and it’s arguably unfair here in the sense that Dawkins has spoken out against moves to curtail the civil rights of Muslims:

Donald Trump's proposal to discriminate against Muslims in America is an outrage. Muslims are the main VICTIMS of the evil of Islamism.

I don’t see it as “Islamophobia,” or anti-Muslim bigotry, or racism. It’s ignorance masquerading as a value judgment. It’s an uninformed opinion. He’s entitled to that, of course, but the comment comes off as completely uncalled for in that context. It makes me want to scream, “Just enjoy the damn weather and music and stop complaining!”

Dawkins’ attempt to defend himself didn’t help. In comments to The Independent, this is what he said in response to claims that he was being intolerant:

“Church bells are beautiful. The muezzin’s call to prayer can also be very beautiful if recited in a good voice.

“But also, ‘Allahu Akhbar’ is the last thing you hear before the suicide bomb goes off.”

That’s… not helping. That phrase may be the go-to line for suicide bombers, but it also has a completely different context for most Muslims. If he doesn’t understand or appreciate that, he’s playing right into his critics’ hands.

Look: I like Dawkins. I’ve said that before. His science books are incredible, I’ve met lots of people who tell me he changed their lives for the better by helping them break out of the religion bubble, and I genuinely think he means well. But there’s no denying his long list of social media self-owns. There was a while, after his 2016 stroke, when he avoided social media altogether (at least saying anything potentially controversial) on his doctor’s orders. Yet here we are again.

I’m not bothered by peaceful Muslims praying however they want to even if it’s all unfamiliar to me.

I am bothered by ignorant tweets that serve no purpose other than making Muslims feel bad about themselves.

July 17, 2018
AL County Commissioner Who Said She Had the Endorsement of Jesus Loses Election
Next Post