In a disturbing video titled “Hard preaching against fornication,” Christian Hate-Pastor Steven Anderson yelled his way through a sermon against sex outside of marriage.

It’s not enough, though, to just say you shouldn’t do it. That’s soft preaching. Limp preaching, if you will. Anderson doesn’t play that game. He popped in some godly Viagra so he could stay rock-hard for several minutes at a time while screaming about people who advocate polyamory and non-monogamous relationships.

Or Jews. Don’t listen to the Jews, Anderson said (because he’s a rabid anti-Semite).

Nearly the entire transcript is below because… well, it’s insane. And it needs to be documented.

Pay special attention to the highlights climaxes. Especially when he starts ranting about Ph.Ds.

And you know what? In the scheme of your 70, 80, 90-year life, that 2, 3, 4, 5 years that you need to wait until you get married is something you need to just endure. And not just gratify the flood. Well I just can’t wait. Waiting is just asking too much. The biology teacher told me I’m an animal that’s just wired to just hump everything that moves like a dog.

That’s what they’re teaching down at the stupid public fool system! That’s what science is saying. Well, it turns out the mammals aren’t wired for monogamy. Turns out, well, here’s the proof. Look at a dog. It’ll hump anything that breeds.

You know what? The Bible calls sodomites dogs! I happen to be a human being made in the image of God! Not a mammal! Not a dog! I’m not an alley cat! Yeah, you’re right. Cats will just do whatever with all the cats in the neighborhood.

That’s why they have to be spayed and mutilated, because otherwise they’ll just keep going around and just fooling around with every cat in the whole stinking neighborhood.

Well, you know what? I’m not a cat! I’m not a dog! I’m a human being! I don’t care what that biology teacher says down at Devil’s State University.

And you know, you need to understand that you are wired for monogamy by the Spirit of God! You know what? You say, Well, we’re just not wired… Yeah, it’s called a sin. Nature. Why don’t you be renewed in the spirit of your mind? Get saved. Read the Bible. Pray to God. And you know what? He’ll rewire that stupid part of your brain so you won’t act like an animal!

He killed 23,000 people in one day for fornication. But you’re telling me, oh, it’s just an unrealistic expectation.

Oh, it’s just too much to ask to be with the same person. NO! You stay faithful to your spouse until death do you part! Let the world tell you, oh, it’s just normal… yes, it’s normal for you, you filthy whore. I don’t care what Ph.D. you think you are, you stinking biologist whore. You filthy, dirty, smelly, vile whore. You know what? You just want everybody to be like you, you skank.

You know these women who write these articles? Oh, it turns out it’s normal to express yourself and just be with every dude!

You filthy disgusting whore. Daddy didn’t show you enough attention or whatever, or you got molested by your, your single mom’s boyfriends that were a revolving door coming through every week, and they molested you and abused you, and now you want to abuse the whole world with your vile sick philosophy?

You say, I don’t know if I’m comfortable with this kind of preaching. Well, you know what? I’m not comfortable with our society that is filled with whores and whoremongers! And you know what? These kids, they watch TV, and they see people going to bed on the first date, and they see all the fornication and adultery, but, you know, when you come to church, I’m going to tell it like it is! It’s dirty! It’s vile! It’s unclean! It’s disgusting! It’s filthy!

That’s what we ought to call it. Here’s a word that needs to be in your vocabulary: Filthy.

I don’t need some Jew to tell me that unclean is actually a ritual impurity. No, unclean means dirty. Look up “unclean” in the Bible. You know what it means? It means dirty.

Now, you didn’t need me to tell you that, did you? But the Jews today, they want to tell everybody that unclean is ritual impurity. It has nothing to do with sanitation.

No, it has everything to do with sanitation. Bunch of dirty whores and whoremongers. Dirty, filthy, vile, unclean, gross, wicked.

We need to be renewed in the spirit of our mind today. We need to be filled with the Holy Spirit of God, and we need to look at that road ahead of us that leads from today until the wedding altar when we walk pure across the wedding altar and say, “I can do all things through Christ which strengthens me! I can do! I will do!”

Young people need to listen to advice. They need to listen to instruction. They need to bow down their ear and realize that God’s plan is that they rejoice with the wife of their youth. And Verse 19: “Let her be as the loving hind and pleasant roe; let her breasts satisfy thee at all times; and be thou ravished always with her love. And why wilt thou, my son, be ravished with a strange woman, and embrace the bosom of a stranger?”

The worst part of that sermon is seeing the children in the audience. There’s no need to fear fornication when they’re being injected with a steady stream of faith-based bigotry.

July 10, 2018
Faith-Healing Couple from Oregon Will Go To Jail After Premature Baby's Death
Next Post 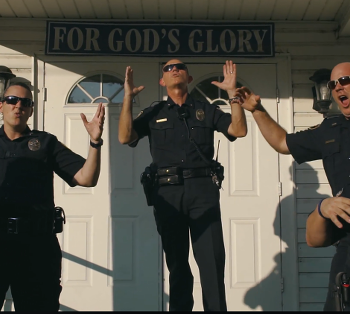 July 10, 2018 This Texas Police Department Is Honoring Jesus By Lip-Synching "God's Not Dead"
Browse Our Archives
What Are Your Thoughts?leave a comment