A Judge Has Ruled Against Atheists Trying to Put Up the Least Offensive Ad Ever July 10, 2018 Hemant Mehta

A Pennsylvania judge has ruled that a government agency had every right to reject an atheist advertisement, putting a temporary end to a saga that’s dragged on for more than six years.

In 2012, atheist Justin Vacula and the Northeastern Pennsylvania Freethought Society attempted to place the following ad on buses in the County of Lackawanna Transit System (COLTS).

COLTS took the bait by rejecting the ad. They actually called it too “controversial.”

Debate? Discussion? What exactly are we arguing about when the ad is just one word?

Was the problem that American Atheists was included on the ad? They were known for being provocative… so Justin submitted a revised ad in 2013, this time without the group’s name. He made a not-at-all controversial ad even less controversial.

That’s… really confusing. How could it be that the word “Atheists” was too controversial, but “Freethought” was okay? Maybe they just didn’t know what the word meant… but that would be evidence that COLTS was just discriminating against atheists.

So what was really going on here? “Atheists” was controversial because it created a debate about religion… but ads from churches were acceptable?

All of that happened in 2015, and there have been a few legal stumbling blocks along the way, but we finally have a decision from U.S. District Judge Malachy E. Mannion.

Unfortunately, it’s not a favorable one. Mannion says COLTS had every right to reject the ad.

What about all those advertisements from churches that were green-lit? COLTS argued that they weren’t promoting God, per se, just advertising the churches. That’s the same logic they used when accepting the ad with only the NEPA Freethought Society’s name on it.

In short, the least offensive atheist ad ever made was deemed so anti-God that the government was within its right to reject it because it could “potentially affect its revenue or ridership.”

The word “Atheists” — just by itself — is officially too in-your-face for certain religious sensibilities. But an advertisement for a local church is still okay.

Justin told me a decision has not yet been made about whether his side will appeal the ruling. I hope they do, though, because the word “atheists” — without any attachment to a belief — shouldn’t be placed on the same level as people who say “God is good” or “God exists.” Our existence is not up for debate, nor should it be considered controversial.

It’s disappointing atheists have to jump through all these hoops to get the same sort of treatment religious people get automatically. That’s why I’m hoping the fight will continue. 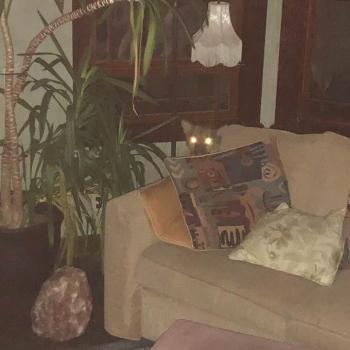