With the announcement of Brett Kavanaugh as Donald Trump‘s nominee to the Supreme Court, atheist and church/state separation groups are weighing in on what his confirmation would mean.

The nomination of Judge Brett Kavanaugh to the Supreme Court reveals that President Trump prioritizes the political ambitions of the religious right over the interests of the American people. Judge Kavanaugh was selected from a list of candidates that were handpicked and carefully vetted by advocacy groups committed to advancing an agenda that places religion above the law. At this crucial moment in our history, we need a Supreme Court Justice who will faithfully interpret the Constitution, not simply serve to rubber stamp the policies of President Trump and the religious right.

In 2015, Kavanaugh vigorously dissented from the DC Circuit’s refusal to reconsider a religious liberty challenge to the Affordable Care Act’s contraceptive mandate en banc, or as a full court rather than a panel. The case centered around Priests for Life, a Catholic organization which claimed that the accommodation from the contraception mandate of the Affordable Care Act was itself an infringement on their religious freedom. Priests for Life argued that filling out the paperwork ‘triggered’ the process by which their employees could receive contraceptive coverage and that this, in and of itself, was a ‘substantial burden.’ In his dissent, Kavanaugh said that forcing a religious organization to file this paperwork is the written equivalent of compelling them to ‘raise their hand’ and help the government provide a medication to which they are religiously opposed. Kavanaugh’s dissent betrays a reckless credulity for the claims of hardship made by faith-based entities even when it comes at a clear and tangible expense to their employees.

The President failed in his duty to nominate a Justice to the highest court in the land tonight, opting instead to nominate an individual that is on a personal crusade to impose their beliefs on the rest of the nation. We immediately call on the President to try again, by withdrawing the nomination of Judge Kavanaugh and searching for a candidate with an impeccable judicial record beyond reproach. If the President fails to do this, the duty falls on the United States Senators to carefully deliberate on the merits of the President’s nominee. At a time so critical to our nation, nothing less than the fate of our democracy, and the definition of who we are as Americans, falls in the hands of this one jurist. While we are dismayed that the divisions in our nation have brought us to where we are in our history today, this moment — this critical decision — will truly be the most important of any sitting U.S. Senator and we implore each one of them to think long and hard about the massive responsibility before them.

The Freedom From Religion Foundation says President Trump’s new Supreme Court nominee Judge Brett Kavanaugh would be “a disaster for the constitutional principle of separation between state and church” and tilt the court to the religious right for more than a generation.

“If Kavanaugh is confirmed, he will unquestionably eviscerate the Establishment Clause of the First Amendment,” warn FFRF Executive Directors Dan Barker and Annie Laurie Gaylor. “It seems unlikely the cherished wall of separation between state and church protecting true religious liberty could survive intact. Many of our hard-won freedoms would be gutted.”

“This is the legal fight of the century for America. Our nation’s future, our constitution and our civil rights hang in the balance,” says Gaylor.

“Judge Kavanaugh fails to understand that only the separation of church and state can guarantee religious freedom for all Americans. Instead, Judge Kavanaugh appears to be intent on eviscerating this fundamental American value,” said Rachel Laser, president and CEO of Americans United. “That fact alone should disqualify him for a seat on the Supreme Court.

“Our core American principle of church-state separation hangs in the balance,” said Laser. “We call on the Senate to reject the nomination of Judge Kavanaugh.”

From day one of this administration, the President has bent over backwards to do the bidding of religious ideologues. So it comes as no surprise that the nomination of Judge Kavanaugh continues this pattern of elevating the religious views of an extreme minority above the rights of women, LGBTQ Americans, atheists, and religious minorities.

During his time on the DC Circuit Court of Appeals, Judge Kavanaugh has repeatedly allowed religion to be used as a license to discriminate and ignore the law. In his view, filling out a form to take advantage of an accommodation under the Affordable Care Act was an illegal ‘burden’ on the religious rights of a corporation. The fact that he has the full-throated support of the Christian-supremacist and anti-LGBTQ hate group the Family Research Council says a lot.

We have closely examined Judge Kavanaugh’s record, and it is clear that he will ignore decades of legal precedent and choose instead to protect bigotry, animus, and religious privilege in the name of their distorted conception of ‘religious freedom.’ This agenda is being advanced by extremist groups to stack the courts in their favor for generations.

Justice Kennedy had a mixed record at best on religious equality issues during his time on the bench, but a future Justice Kavanaugh would be an unmitigated disaster. We urge Senators to protect the shared values of the American people and reject the extremism of this nomination. The American people deserve a Supreme Court that vigorously defends the Constitution’s guarantee of equality under the law for all, not religious privilege for some. 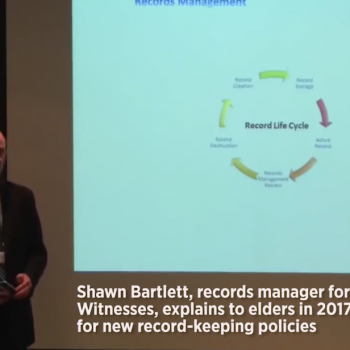