But this new story is really something because it shows how Ken Ham has revised his own attendance numbers, presumably to hype up a struggling tourist attraction.

To make sense of it, you have to check out a brief piece published yesterday by the Cincinnati Enquirer:

Answers in Genesis (AIG), which owns the Ark Encounter and the Creation Museum, reported a 20 percent jump in attendance year over year for the ark.

A million people this past year! Wow! That seems like a lot! But you should be aware of a few things when you hear that number…

So take Ham’s word with a giant grain of salt. After all, the man thinks the universe is only 6,000 years old. He’s not good with numbers.

But it’s what that article says about the first year’s attendance — that “20 percent jump” — that should really raise some eyebrows:

The structure, literally of Biblical proportions, opened to the public in July 2016 and drew about 800,000 visitors to Williamstown during its first year of operation. Answers in Genesis initially projected 1.2 million would attend.

Since the Enquirer wouldn’t make up the attendance number, it’s safe to say they got the 800,000 amount from Answers in Genesis. And it’s true that AiG predicted 1.2 million in October of 2016. But here’s the thing: Both numbers are completely different from what Ham has said in the past.

Let’s start with the estimated numbers for the first year.

Ham said in 2014 that the Ark “is estimated to attract up to 2 million visitors a year.”

The following month, as the Enquirer mentioned, he was at 1.2 million.

And as the first year came to a close, Ham was telling a Christian publication that he would “hit the low end” of an estimated range that started at 1.1 million people. The Ark’s co-founder Mike Zovath gave a mainstream outlet an estimated number of a million around the same time.

You get the picture here, right? The estimate kept getting lower and lower as the first year dragged on. It’s one thing to overshoot the mark before the Ark opened, but they seemed to be overshooting it even as ticket sales were coming in.

Which brings us back to yesterday’s article:

The structure, literally of Biblical proportions, opened to the public in July 2016 and drew about 800,000 visitors to Williamstown during its first year of operation. Answers in Genesis initially projected 1.2 million would attend.

800,000. The number suddenly dropped by 20% from what Answers in Genesis was saying as the first year was coming to a close. They would have known the correct number at the time, yet they gave inflated numbers to news outlets.

These people are liars. The proof is right there.

Which leads to a different question: Why?

Why not just be honest about attendance? They have to know how many tickets are being sold. What are they trying to hide?

To find answers to those questions, check out this press release Ken Ham released on July 6, 2017, for the first anniversary of the Ark:

For its part, AiG instead used America’s Research Group (ARG) to conduct nationwide market research on the Ark Encounter, and ARG predicted attendance to be 1.4–2.2 million for a normal year of operation. Even though the Ark did not open until the middle of the tourist season in July of 2016, its non-normal first year has still seen 1 million visitors (with about 1.5 million visitors total for both attractions). AiG predicts that the second year’s attendance will be closer to the high end of the ARG figure, based on several factors: hundreds of motor coaches are booked to come (organized by numerous tour companies), other group bookings are also increasing, people now having ample time to plan their vacations to the Ark, and other encouraging trends.

So not only did Ham himself say the attendance was a million — a number he’s now telling local media was actually 200,000 people lower — he’s saying estimated attendance for Year Two will be close to 2.2 million people.

That’s quite a bar to live up to… and he failed. It wasn’t even close. The actual attendance, according to Ham in that Cincinnati Enquirer article, was “one million visitors during its second year of operation.”

One million. That’s it. That’s pathetic. That’s especially bad when compared to Ham’s own estimates.

Maybe — and this is just a theory — they’re trying to manipulate their old numbers (for which we have no public confirmation) so that Year Two’s attendance looks better by comparison.

I think that would make sense when you consider that the alternative would be that they got a million visitors in Year One and another million in Year Two. Their brand new hundred-million dollar attraction isn’t even drawing in more tourists as word of mouth spreads. That’s really bad.

Is there another explanation I’m missing?

And remember this: It won’t be long before we get the public records from 2018 showing actual attendance, month by month, for the Ark. It’s entirely possible that Ark Encounter had fewer than a million visitors in Year Two… which would mean attendance went down.

We’ll know the truth before long. In the meantime, I can only assume Ham is sitting in an office somewhere trying to come up with a list of people to blame for the Ark’s failures. He should write his own name at the top. 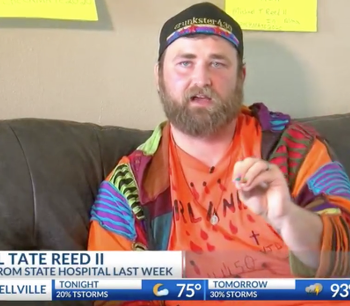 July 6, 2018
Man Who Destroyed Arkansas Ten Commandments Monument Doesn't Regret It At All
Next Post 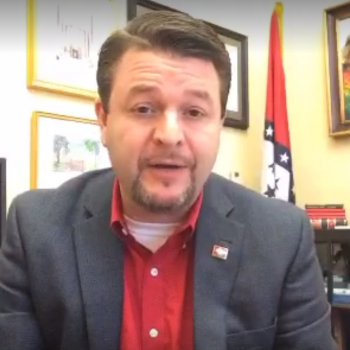