Family of 11 Dead After Hanging Themselves Thinking God Would Save Them July 2, 2018 David Gee

Eleven people were found dead in New Delhi after hanging themselves in what authorities are describing as a family religious ritual gone horribly wrong. 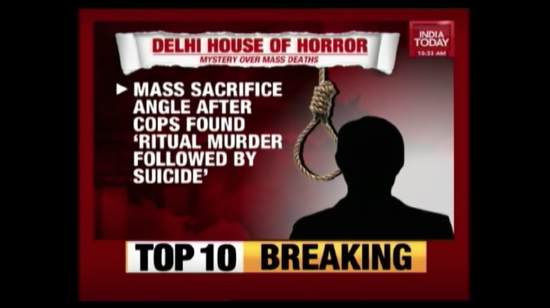 The family members, including two boys who were only 15 years old, were apparently conducting a tradition through which they hoped to “obtain salvation.” Notes found in their prayer room suggest they believed God would intervene and save all their lives.

Needless to say, the family was wrong.

Police initially thought they had killed themselves intentionally, but later found evidence to the contrary, according to local reports.

On Sunday morning, when police started their probe in the case, they suspected it to be a suicide pact. However, investigators remained clueless for over two hours about the motive until they chanced upon a detailed one-page hand-written note in the prayer area of the family’s house. Soon, police also recovered two notebooks, the pages of which discussed spirituality, salvation, the ritual and mentioned a few dates.

The recoveries of the notes, the signs of a ‘hawan’ (a ritual involving burning of offerings such as ghee and grains) in the house and the manner in which the bodies were found have given police enough reasons to suspect that the family might have died in a religious ritual gone wrong.

“Almost every step mentioned in the note seems to be have been religiously followed by the family,” said a police officer.

The steps for “obtaining salvation” were written point wise in Hindi, each marked with an arrow. One important rule was that the family was to avoid using mobile phones and not disclose the rituals to anyone else. It took the police a few hours to recover their mobile phones from the house. Police refused to disclose from where they recovered the phones from inside the house.

You have to wonder why a religious family would even feel the need to test their God. The ritual sounds more like something you’d do if you had doubts about Him, not if you’re already devout.

“The ritual required participants to tie their hands and legs, blindfold and gag themselves and stuff their ears with cotton balls. Only Lalit’s wife Tina did not have any restrains on her, suggesting she was the one who tied everyone else’s hands before hanging herself,” said the officer…

“The moment they hanged themselves and began gasping for breathe, they would see God saving them,” said the officer, paraphrasing the note.

No one saved them. No one made it out alive.

Police are investigating other angles — maybe a murderer placed the note to distract them — but the evidence seems to point in the direction of the religious ritual.

If that turns out to be the case, it would show that faith, in itself, is not necessary good. Religion without critical thinking can be deadly.

(Screenshot via YouTube. Thanks to Rohan for the link) 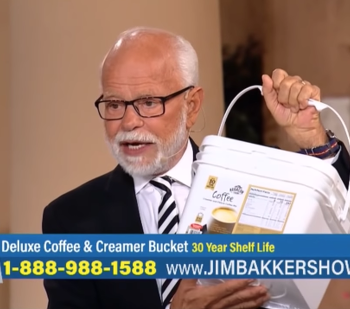 July 2, 2018 Jim Bakker: Buy My Coffee! You Can Trade It for a Car When the End Times Arrive
Browse Our Archives
What Are Your Thoughts?leave a comment