On Saturday, liberals across the country protested Donald Trump‘s cruel immigration policies, and Arkansas was no exception. There was a Families Belong Together rally at the state capitol… which also happens to be where State Sen. Jason Rapert recently erected a Ten Commandments monument that’s now the subject of multiple lawsuits.

But if you wanted to see the monument on Saturday, you would’ve been out of luck.

Someone brought along a tarp to cover up the Christian display with a different message. A better commandment, if you will.

That image was taken by Gwen Combs, an activist who recently campaigned for a seat in Congress but lost in the Democratic primary.

Rapert wasn’t happy with the change, calling Combs (or whoever placed the tarp) “lawless”:

Any day we get a liberal democrat that supports killing little innocent baby girls & boys through abortion to actually start quoting Jesus and the Bible – it’s a step in the right direction. Thanks for sharing your actions with me – makes things easy. #arpx #LawlessLiberals https://t.co/EL6OdsJxMu

Leave it to a Republican like Rapert to see the phrase “love thy neighbor” and get angry over it to the point where his mind goes to perceived murder.

By the way, there’s nothing lawless about putting a tarp on the monument.

Lawless is when you erect a Christian monument on government property. Rapert doesn’t know that yet, but he’ll find out soon enough.

(via Arkansas Times. Thanks to Brian for the link) 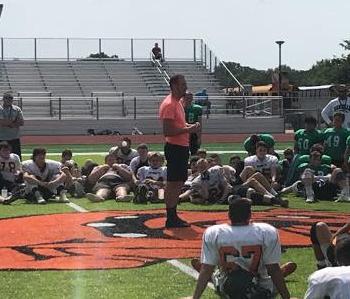 July 1, 2018
Here's Some Advice for the Preacher at an Arkansas High School Football Camp
Next Post 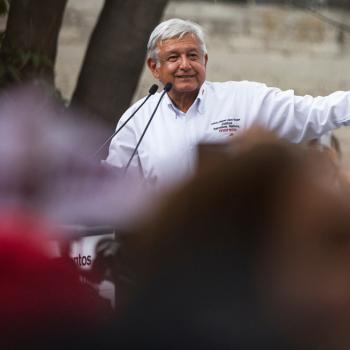