TX Tax Collector Goes from One Religious Phrase to Another on Official Documents June 29, 2018 Hemant Mehta

Residents of Angelina County, Texas should expect to see “In God We Trust” on their tax statements later this year.

It’s a way to fix a problem created by tax assessor Billie Page when, last year, she replaced the motto with the phrase “Believers Serving Our Citizens.”

Unfortunately, none of the conversations about these changes involve church/state separation.

When Page was elected tax assessor, she put the phrase about believers on all tax statements. But people got upset. Not because they felt the phrase excluded non-believers — they didn’t give a damn about that — but because they wanted to see the motto everywhere.

Page herself didn’t seem to understand the legal problems.

She says nothing is wrong with “In God We Trust” because she “Trusts in God” as well.

“We’re believers in Jesus Christ here,” said Page. “It was a misinterpretation of what I meant and it got out of Facebook and a bigger deal was made out of it than necessary.”

Who’s “we”? The government? She’s giving away the game there…

After the backlash, she decided to revert back to “In God We Trust” — which is still incredibly problematic.

What’s frustrating is that local news media just passes this off as a cute local story, completely oblivious to how this is completely illegal. It suggests that the local government has an official religion — not to mention it mixes God and mammon.

Look at the framing of this story by station KTRE:

… After discussing with her staff, Page said all subsequent tax statements will restore the original motto “In God We Trust.”

“But I survived it. I’m stronger for it. And [Sheriff] Greg [Sanches] and I have reached out and talked to each other. We greet each other. We run into each other, and I think we have a good relationship because I know I can rely on this man,” Page said.

Both Sanches and Page explained what was once a cause for division has now forged a new bond.

“Billie and myself, we have a service heart and that showed through the way she (referring to Page) handled this,” Sanches said.

No! This is not some adorable story about two friends working through a minor difference. This is a story about two government officials who are debating the best way to illegally push Christianity on everyone in their community. What the hell is wrong with the news reporters? They should be speaking to legal analysts, not pretending the problem doesn’t exist. It’s irresponsible journalism.

It shouldn’t matter that this is Texas and Christianity is prevalent. That doesn’t mean these phrases belong on government forms.

It’s not even the first time something like this has happened. In 2014, the tax assessor in Tarrant County, TX also put “In God We Trust” on documents. He was aware of the legal issues — and is currently running for a congressional seat by bragging about how he didn’t care. As he told the crowd at one rally, “I did it knowing [I’d] probably be sued!”

This is a Texas problem that even some Texas reporters aren’t taking as seriously as they should. 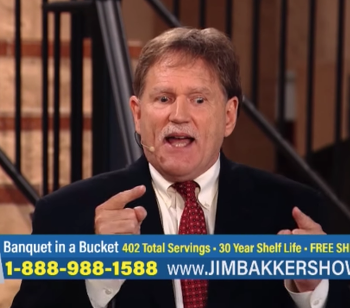 June 29, 2018 Christian Preachers: God Will Wipe Out Humanity Due to LGBTQ Rights and Abortion
Browse Our Archives
What Are Your Thoughts?leave a comment