In a huge victory for church/state separation, the Supreme Court did nothing.

They declined to hear an appeal in a case involving Christian invocations offered by the Rowan County Board of Commissioners in North Carolina. That means the previous decision, in which the entire Fourth Circuit Court of Appeals said the prayers were unconstitutional, will remain in place.

The controversy began in 2012, when the ACLU of North Carolina warned the Commissioners about the problem with their prayers. The ACLU’s letter was ignored, so the group filed a lawsuit to stop the Christian prayers in March of 2013. Here’s what they were concerned about:

So it wasn’t surprising when, in 2015, U.S. District Judge James Beaty Jr. ruled that the Commissioners violated the law and continued to do so every time they uttered a prayer to Jesus. While the Supreme Court’s ruling in Greece v. Galloway allowed for sectarian invocations delivered by community members, this was clearly a religious endorsement offered by the board members.

That last bit was huge. The Commissioners argued that they weren’t breaking the law because anyone in their position could deliver an invocation… it just so happened that they all happened to be Christian. If Satanists or atheists wanted to deliver the invocation, all they had to do was get elected to the Board first. It would be different, by the Commissioners’ logic, if pastors were invited to give the prayers. That wasn’t the case, they argued, so everything was okay.

It wasn’t okay. Beaty’s ruling said their argument made no sense. This was essentially default Christian prayer by the government in a community where non-Christians couldn’t have their voices heard in the same way.

In July of 2016, the Commissioners voted unanimously to appeal the ruling — putting a lot of taxpayer money at stake — and it looked like it worked. Two of the three judges at the appellate court voted to overturn the lower court’s decision, reversing the ruling and effectively saying the legislative prayers were okay.

And what about the argument that voters could just elect non-Christians if they wanted to hear non-Christian prayers? Wilkinson shot that down as well:

In short, if this ruling were adopted everywhere, it would result in local leaders ending inclusive invocation practices — bye bye, atheists and Satanists and Muslims — and adopting a policy that lets the almost-entirely-Christian group of legislators deliver their own Christian prayers at every meeting. It would be a wrecking ball against the wall of separation between church and state.

The ACLU responded by asking the entire Fourth Circuit to do an en banc review, reconsidering the decision as a full court, and the Court agreed to hear it.

That decision came down last July, and the full Court said in a 10-5 ruling that of course these pretty-much-only Christian prayers were an unconstitutional establishment of religion by the government.

We conclude that the Constitution does not allow what happened in Rowan County. The prayer practice served to identify the government with Christianity and risked conveying to citizens of minority faiths a message of exclusion. And because the commissioners were the exclusive prayer-givers, Rowan County’s invocation practice falls well outside the more inclusive, minister-oriented practice of legislative prayer described in Town of Greece. Indeed, if elected representatives invite their constituents to participate in prayers invoking a single faith for meeting upon meeting, year after year, it is difficult to imagine constitutional limits to sectarian prayer practice.

The principle at stake here may be a profound one, but it is also simple. The
Establishment Clause does not permit a seat of government to wrap itself in a single faith. But here elected officials took up a ministerial function and led the political community in prayers that communicated exclusivity, leaving members of minority faiths unwilling participants or discomforted observers to the sectarian exercises of a religion to which they did not subscribe. The solemn invocation of a single faith in so many meetings over so many years distanced adherents of other faiths from that representative government which affects the lives of all citizens and which Americans of every spiritual persuasion have every right to call their own.

Hard to drop a mic any harder than that.

The judges also rejected the bizarre idea that elections themselves could decide which prayers were said at meetings, especially when that decision was made by an exclusively Christian group of officials.

The Court said it was up to Rowan County officials to decide a legal alternative, but what they were doing at the time couldn’t stand.

Remember: All Americans can already pray without being censored. But a government meeting isn’t the place to deliver sermons. The fact of the matter is that atheists, Satanists, and several other non-Christian groups would never have their beliefs promoted or mentioned during the invocation by the all-Christian Rowan County government. Unless those non-Christian faiths have the ability to deliver the invocations, this should always be considered a violation of the law.

That’s what the full Fourth Circuit said. The Alliance Defending Freedom attorneys representing Rowan County decided to try one more time to appeal the decision by asking the Supreme Court to step in… and this morning, the Supreme Court dismissed their request.

Unlike many of their other cases, though, this wasn’t just a terse dismissal. Justice Clarence Thomas wrote a lengthy dissent (joined by Neil Gorsuch), saying he wanted the Court to take up this case because the law regarding prayers at government meetings are confusing:

The only real difference between this case and Town of Greece is the person leading the prayer. Prayers in Rowan County are led by the commissioners, while prayers in Greece are led by guest ministers. The Fourth Circuit leaned heavily on this distinction to justify conducting its own free-floating evaluation of Rowan County’s prayers… But what it should have done, under our precedents, is examine whether “history shows that the specific practice [of legislator-led prayer] is permitted”… If the Fourth Circuit had conducted that inquiry, it would have found a rich historical tradition of legislator-led prayer.

… the Sixth and Fourth Circuits are now split on the legality of legislator-led prayer. State and local lawmakers can lead prayers in Tennessee, Kentucky, Ohio, and Michigan, but not in South Carolina, North Carolina, Virginia, Maryland, or West Virginia. This Court should have stepped in to resolve this conflict.

Even most of the other conservative justices didn’t agree enough with that analysis to hear the case. The ACLU said it was the right move:

“This case has always been about making Rowan County more welcoming to people of all beliefs, and we are so glad that the Supreme Court has let this ruling stand,” said Nan Lund, the lead plaintiff in the case… “Everyone should be able to attend public meetings and raise concerns with government officials without having to violate or be judged by their religious beliefs.”

“Government officials don’t have boundless power to impose their religious beliefs on community members,” said Daniel Mach, director of the ACLU Program on Freedom of Religion and Belief. “As the court of appeals recognized, there are real constitutional limits on government-sponsored prayer.”

This wasn’t — and never has been — an anti-Christian case, by the way. The rulings were against a religious monopoly on invocations by elected officials. Rowan County leaders are still allowed to institute a policy that welcomes people of all faiths or no faith to deliver a prayer if they want to. 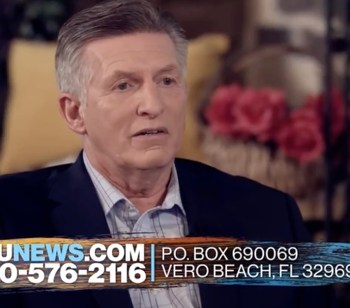 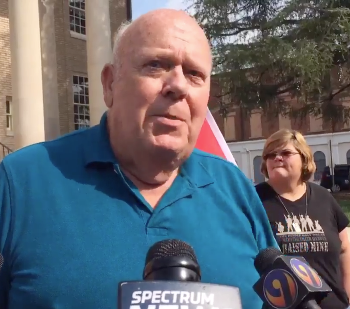 June 28, 2018 GOP Candidate for NC State House Says God is Racist and Jews Descend from Satan
Browse Our Archives
What Are Your Thoughts?leave a comment