Christian broadcaster Rick Wiles added some racism into his bigot bowl yesterday when he said God was punishing our country for legalizing abortion by allowing “a brown invasion” of white America.

“Our soil is soaked in baby blood,” Wiles said. “Four thousand babies killed every day, their guts, their intestines, their brains, their blood flushed down the toilet in the baby butcher shops, [it] goes into the sewer system, carried in the sewer pipes under the city streets, into the sewage system. Our country is soaked in blood and the soil is crying out for justice.”

Wiles said that he has been warning “for 20 years that if we don’t repent, there will be another people brought in that will push us off the land.” He said that he had long thought that these people would come from some place like China or Russia but recently came to realize that the invaders are actually coming from Central America.

“It just hit me in the past week,” he said. “We’ve already been invaded. We’re already being pushed off the land. It’s already happened. The judgment has been underway for years and we didn’t see it. God is bringing another people in to America and pushing the white Europeans off the land.”

“We have a brown invasion that has come in,” Wiles declared. “This is the land vomiting the people out.”

As one of the “browns” — albeit not the kind he’s referring to — I see no problem here.

But even if you look behind the blatant racism, think about what Wiles is getting at. Because women have rights over their bodies in this country, Wiles says God has somehow punished us by allowing immigrants seeking asylum into our country as they fight for legal citizenship.

There’s nothing about that logic that makes sense, nor can you justify any of that with the words of Jesus. And Wiles doesn’t even consider how many of those “brown” people are Christians themselves… or what “white Europeans” did to other people who were on the land before them.

It’s just racism on top of sexism on top of irrationality. It’s a perfect mix for white evangelicals in this political climate. 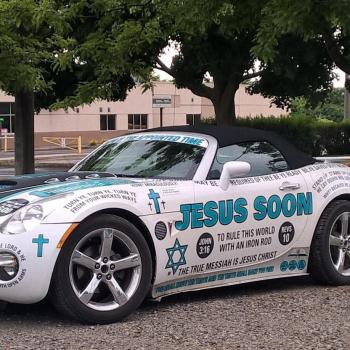 June 28, 2018
The Driver of This Insane Jesusmobile Better Not Have Any Road Rage
Next Post