Russell Walker, a Republican running for the State House in North Carolina, is a Confederate flag-loving white supremacist who believes women are “the weaker sex” in part because they’re more likely to accept black people “in the voting booth and in bed.”

Also, his ability to design a webpage is Time Cube-worthy.

Walker is the author behind a batshit crazy site that also says God is a racist white supremacist and that “jews are the children of Satan.” 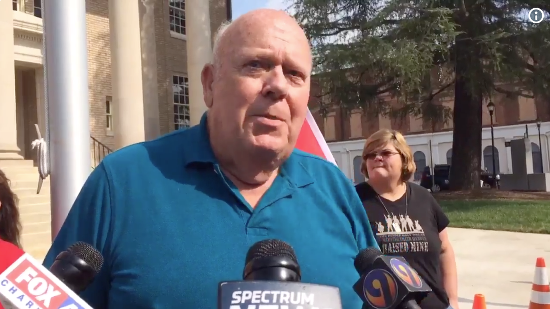 His beliefs finally caught up with him yesterday and the state’s Republican Party now says they will no longer support him in his race:

“Based on recent behavior and previous statements, the North Carolina Republican Party is unable and unwilling to support the Republican nominated candidate for North Carolina House District 48,” GOP chairman Robin Hayes said in a statement Tuesday. “The NCGOP along with our local parties in Hoke, Scotland and Robeson Counties will be spending our time and resources supporting Republican candidates that better reflect the values of our party.”

Yeah! They prefer candidates who only hurt minorities through legislation instead of through their words.

The incumbent is a Democrat, Garland Pierce, who has been in office for more than a decade without any serious opposition, so it’s not like this race was going to be competitive. But the revelations about Walker tell you a lot about the kind of candidates drawn to the GOP.

Want more evidence of his racism? Sure you do. He was embroiled in a lawsuit to keep Confederate flags in courtrooms and, while being interviewed outside the courthouse last year following the case’s dismissal, used a slur in describing Martin Luther King, Jr. He couldn’t stop himself in time to not say it.

According to the Southern Poverty Law Center, Walker’s actions match his words:

In June 2017, Walker was involved in a bizarre incident at a Lowe’s Home Improvement store in Moore County, North Carolina, when he allegedly verbally accosted a young lady for having tattoos on her body. The woman, who posted about the incident on her Facebook page, stated that when she walked away from Walker he continued to follow her, insulting her looks and her tattoos. When the young woman told Walker that she was a U.S. Army veteran recently returned from Afghanistan, Walker purportedly mocked her service to the nation and continued to harass her, subsequently making a scene at the checkout line over Lowe’s offering of military discounts and mocking U.S. veterans for their service.

Despite all this, he won the Republican primary by a 2:1 margin and he’ll be on the ballot this November. Even if he’s not getting any formal support from the state party, it’s not like the state party’s actively telling people to vote for his opponent. That would be heresy… North Carolinians would be better off avoiding the GOP entirely.