Capital Gazette Shooting Survivor: “I Couldn’t Give a F*** About” Your Prayers June 28, 2018 Hemant Mehta

Capital Gazette Shooting Survivor: “I Couldn’t Give a F*** About” Your Prayers

During an interview with CNN’s Anderson Cooper tonight, Phil Davis and Selene San Felice, reporters at the Capital Gazette in Annapolis, Maryland where a mass shooting took place today, said they really didn’t care about anyone’s thoughts and prayers — especially from Donald Trump — unless there was action backing it up.

We need more than prayers. I appreciate the prayers. I was praying the entire time I was under that desk. I want your prayers, but I want something else.

Davis then echoed her thoughts around 13:30:

I was praying when he started reloading that shotgun that there weren’t going to be more bodies, and you know what? If we’re at a position in our society where all we can offer each other is prayers, then… where are we? Where are we as a society where people die, and that’s the end of that story?

The reporters acknowledged, probably correctly, that no one would be covering this story after a couple of days. Which means this kind of tragedy will happen again, somewhere else, because Republicans refuse to do anything to limit gun violence.

San Felice, who said she covered the Pulse nightclub massacre, then reiterated her comments about prayers.

I just don’t know what I want right now, right? But I’m gonna need more than a couple days of news coverage and some thoughts and prayers. Because it’s… our whole life has been shattered. And so thanks for your prayers, but I couldn’t give a fuck about them if there’s nothing else.

The word is bleeped out on YouTube, but it wasn’t bleeped on CNN when it aired.

And she’s absolutely right. If all people have to offer are thoughts and prayers, which is the go-to gift from conservatives after a mass shooting, they’re wasting everyone’s time.

It’s insulting, really. It’s a way of saying I’m thinking about you for a moment, generating goodwill for myself, and doing nothing to prevent future victims.

The survivors deserve better than that. 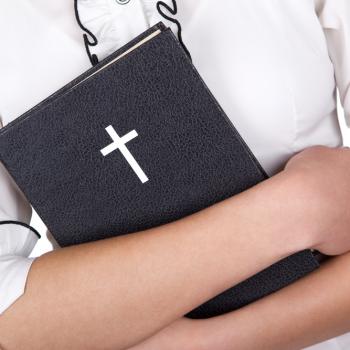 June 28, 2018
Here's What Graduates of Christians Schools Have to Say About Their Alma Maters
Next Post