PA State Rep. Brian Sims Has a Powerful Message (and a Finger) for Mike Pence

Pennsylvania State Rep. Brian Sims had a message for Vice President Mike Pence before his appearance at a Republican fundraiser last night: Someone with that much hate in his heart has no place in the City of Brotherly Love.

OFFICIAL WELCOME: Vice President Mike Pence let me be the first person to officially welcome you to the City of Brotherly Love, and to my District in the State House!

To be clear, we’re a City of soaring diversity. We believe in the power of all people to live and to contribute: Black, Brown, Queer, Trans, Atheist, Immigrant, we want you and we’ll respect you.

So keep that in mind while you’re here raising money to attack more families, spread more lies, blaspheme with your bible, and maybe even talk to a woman without your wife in the room. We have plenty of them, and they’re pretty much all more powerful and more real than you have ever been.

So…get bent, then get out!

He’s saying all the things liberals think about but generally only say to our own echo chambers. And if you think conservatives are going to jump on this, Sims isn’t afraid:

He has a point. If anyone is offended by the middle finger, or the harsh language, just get over it. Pence’s anti-immigrant, anti-women, anti-LGBTQ policies are infinitely worse than some symbolic act of resistance.

Sims, by the way, has long been an advocate for women’s rights. He gave an incredible speech against a draconian anti-abortion bill in 2016. He is also one of only a handful of openly non-religious elected state officials in the country. 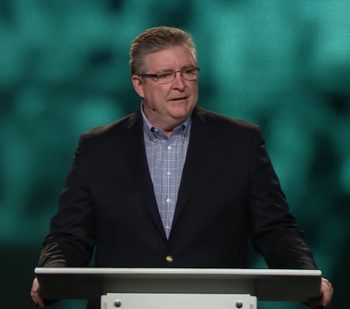 June 20, 2018
Focus on the Family: Trump's Immigrant Prisons Are Bad, But Abortion Is Worse
Next Post

June 20, 2018 An Appeals Court Will Decide If Tax-Free Housing for Religious Leaders is Legal
Browse Our Archives
What Are Your Thoughts?leave a comment